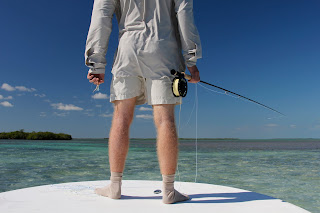 Fly fishing for bonefish at Christmas isn’t the ideal time to target them, not in Cuba anyway, but December was the only convenient time we could take a family holiday and Cuba is where we wanted to go. So on 8th December, my Mum, Dad and I flew to Havana. We stayed there for one night and then took a second flight to Cayo Coco, Jardines del Rey. Cayo Coco is one of a string of islands that shelters Cuba’s North coast. As we arrived at our hotel, before even checking in, we were greeted by our fishing guide, Tito, with a cold beer for my Dad and a Pina Colada for my mum and me - a very warm welcome - and we were soon discussing our fishing plans in the little Spanish I know and the little English the guide knew. Reading between the lines it sounded as if we’d probably arrived at the worst time, as a cold front had shown itself in the previous few days and it didn’t look like it was going to improve over our five fishing days we had booked.

The area we were to fish is called Paredon Grande, a beautiful nature reserve area of mangroves, flats, islands and channels, an hours drive from the hotel by taxi and renowned to hold some very large bonefish. Despite the weather, we were still hopeful of landing some nice Bones and a few other exotic species. 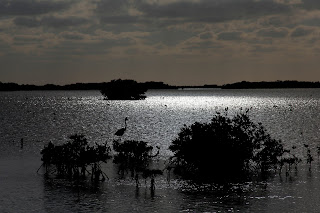 On our first day we spent wading the flats. As predicted there was a chilly northerly wind making the water choppy and hard to see fish. We only saw four or five bonefish but Dad managed to catch the first one he encountered - a lovely fish of around 4lb 8oz. We couldn’t believe how cold the water temperature was, and after a tough day we returned to the hotel. Dad was shivering and we also discovered he’d caught a cold and it really came out in the evening. He said he thought he had felt one coming on the day before - not a brilliant start to our trip, one fish and a cold, but I did find a large Starfish. 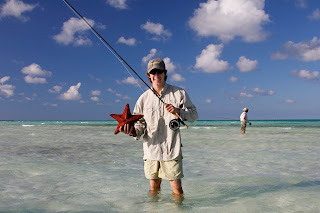 On our second day fishing, the weather looked slightly better, but the water was still cool as it hadn’t had the chance to warm up. We checked out the flats in the morning but there were no fish there, so we decided to head for some deeper channels and do some fun fishing with bucktail jigs, plugs and flies. For most of the day we did this and we caught a good variety of fish - mostly Mutton, Cubera, Gray Snapper and small Jacks. We also caught Schoolmasters and Blue Runner. We saw a shoal of about eight Tarpon swim past but they took little interest in a popper or jig. Mid-afternoon we headed back to check out the flats again in the hope that they’d warmed up a bit and some bonefish had moved onto them. We spent the last hour poling the flats and spotted one nice Permit but it was on a mission, not stopping for anybody. Minutes later, we came across a small shoal of bonefish and I managed to catch my first Cuban bonefish - my biggest on the fly. 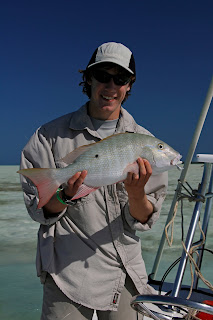 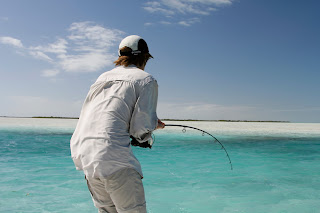 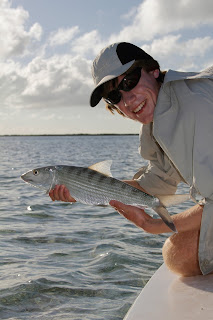 The following day, the conditions were much, much better - low wind speeds, a low tide and a bright, hot, cloudless day - perfect. The flats were alive, at last, with the odd Stingray, Trunkfish, and more importantly, Bonefish. We spotted a big one, not difficult as it was feeding hungrily with its whole tail waving clear out of the inch-deep flats. Dad made a cast and it landed perfectly. As the bonefish finished feeding in the sand Dad stripped the fly a couple of times and the bonefish nailed it. What a fight! It tore off into the distance, ripping off lots of backing. Eventually he got it safely to the boat. He’d caught it on one of his rubber legged, Crazy Charlie flies. The guide estimated it around 8-9lbs, we don’t think it was that big but it was still Dad’s P.B Bonefish on a fly. 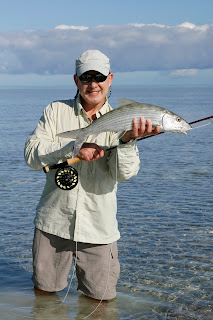 Minutes after, we confronted a large shoal of fish that I cast to. I was soon hooked up and holding the second bone of the day. This was all in about an hour and a half. We had a couple more chances but we messed up and for some reason they suddenly didn’t seem interested anymore. A thick band of cloud then began to loom over, coupled with an increasingly strong wind. The fish soon disappeared so we headed into the mangroves for some more fun fishing with flies, plugs and jigs. We caught a variety of species on flies including Dog Snapper, Bar Jack and more Cubera and Gray Snapper. I also had a few Barracuda on plugs, and a couple on the fly. 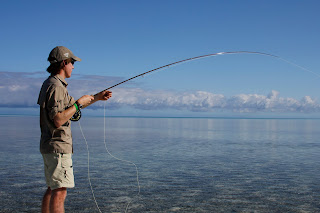 This string of cloud was the start of another bad cold front which was to last for another 3 days. Tito decided to postpone our next two fishing days as he thought it would be too rough and would be a waste of time. This wasn't a bad thing, as it gave my Dad time to get over his cold as he was quite rough. 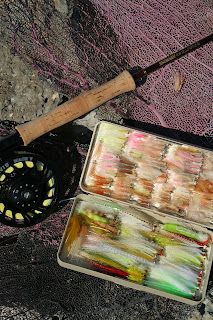 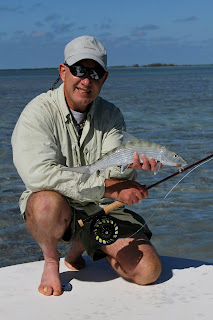 When we fished again with our guide for the last 2 days of our booked fishing, the flats were still very cold but we did manage to catch a few more bones on the right tide, but they were few and far between. It was very windy too, so most of the time, we fished the deeper channels or mangroves. On the last day, between us, we caught about 70 Mutton, Cubera and Lane Snapper, some of which were over 5lbs. They were great fun on the fly rod - a fish over 5lbs really puts up a fight! I caught a big one of around 7 - 8lbs too. We took one of these Snappers back to the hotel to eat and had it grilled with garlic, lemon and lime - mmmmmmm! On the same day Dad caught a Scamp (a small species of Grouper) on the fly.

Our guided fishing had come to an end so we decided to do some exploring of our own. We hopped on the local bus and tried some of the bridges on the way to Pilar beach, Ernest Hemingway’s favourite beach. Around these bridges we caught Black Grouper, Stoplight Parrotfish, Snappers, a couple of Barracudas and a tiny Goldspot Goby which took the smallest fly I took out with me! 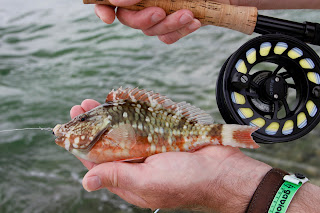 We also bumped into a Canadian fisherman at a hotel - a Pro Staff guide who worked for Ross Reels - Claude Bosquets. He very kindly gave us advice on where to do some DIY flats fishing as he knew the area extemely well. These areas were on Cayo Coco and possibly the best flats we’ve ever walked on. I did get stung by a Jellyfish though on these flats, which was quite painful! 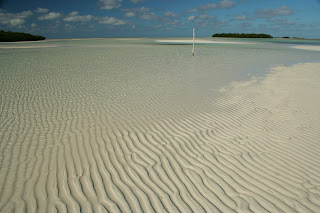 Here, Dad nearly caught a bonefish but it refused his fly at the last minute. We only spotted about 4 the whole 3 afternoons we fished it, but we did catch Trunkfish on the fly, Bluestriped Grunt, Bar Jack, Snapper and one afternoon I had 3 Barracuda in the space of about half an hour, all around 8lbs. They took a Yo Zuri Crystal minnow as the tide was coming in. Claude explained to us how the locals had caught many of the bones in large nets, which they eat. 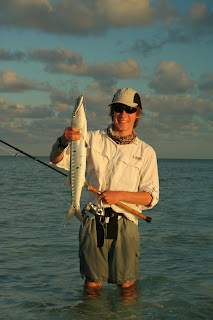 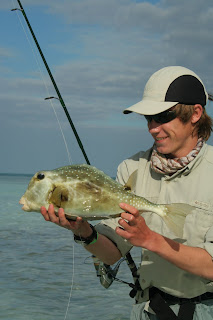 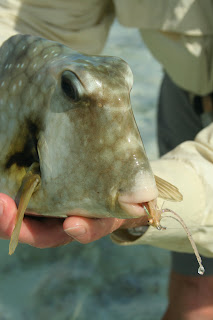 At our hotel we made good friends with the staff and one recommended to go out fishing with his best mate. So, as the weather had improved, we took him up on his invitation and went out with him one afternoon on his boat. Again, we caught a variety of fish on flies but the biggest shock was catching an 100lb Eagle Ray on a piece of plastic binliner! The guy wanted to catch one as he wanted to take it home for his family and friends to eat, he said they taste very good, so he tied a piece of red plastic binliner on to a large treble hook and told me to cast to one! Astonishingly, as it fell through the water, the huge fish turned on to its side and engulfed it! I was amazed it took it! It was one of the strongest fights I’ve ever had with a fish, especially on Dad’s small spinning reel, and after half an hour of battling with it, we had it to the boat. I was pleased to find out he’d decided not to kill it as he thought it was too small!!! He didn’t give up though - Dad hooked one minutes later about 350lbs, but it was so powerful it just stripped the reel of braid so we had to motor after it. After about three quarters of an hour the guy tightened the drag up a little too much on Dad’s reel whilst he was playing it. You couldn't pull the braid off with your hands - this fish just ripped it off with ease. It went on another long run and the 50lb braid snapped. In a way, I think this was probably a good thing as one, it was getting dark and two, the fish got to live another day - it would have been a shame to kill such a magnificent creature.

We also had 3 hours fishing on Laguna La Redonda, a lake on mainland Cuba which my mum joined us on, one day, and really enjoyed. The lake is on the way to the town of Moron and you have to go over a huge causeway that links Cayo Coco to the mainland. On the causeway we saw a massive flock of flamingoes making a pink line on the horizon - a fantastic sight. On the lake we fished for African Sharptooth Catfish, an invasive species indigenous to the River Nile. We caught two, the biggest being about 12lbs, which took strips of freelined carp! It was great fun casting our baits into the mangrove roots for the catfish. It was a beautiful place too. 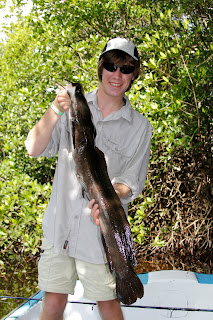 Overall, on our trip, we managed to catch 13 Bonefish and 16 new species of fish - 8 on the fly. Despite the weather and Dad’s cold, we had a really good time, even though it’s not the best time to visit for fishing. The hotel was great and we met some lovely people there - including a teacher from my school! - would you believe it? it’s small world - I’m sure they were checking up on me! You can see why Jardines del Rey (Gardens of the King) was one of Ernest Hemingway’s favourite fishing spots - the flats there are fantastic and we would love to go back there again one day. A big 'thank you' to Alexander Kennedy of Castaway Flyfishing for arranging such a smooth trip for us. 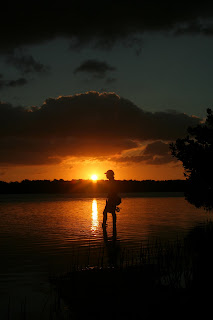