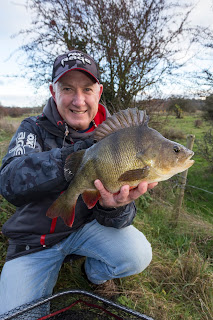 I like to think of March as a month of two halves. The first couple of weeks I normally try to pack in as much fishing as possible before the river coarse season closes, and then the last couple of weeks are spent catching up with things, one of them being my blog! It was an extremely tough end to the season on the rivers I fished (although both my Dad and I caught some nice fish in the end), but before I talk about that, I should reflect on some great reservoir fishing I had at the beginning of this year.

January can be bitterly cold and bleak on a big expanse of water, but after not getting out on a reservoir since mid November, Dad and I were keen to kick start 2019 on a reservoir, if the conditions were calm. Luckily, January 2nd was forecast to be exactly that, and we headed to Grafham to target Zander and Perch. We couldn’t believe how low the water levels were - they were so low, that the harbour was bone dry, and the four boats on the water were being kept on a buoy chain almost in the middle of the reservoir!

The last half of 2018 was very mild and we were hoping the fish hadn’t moved in to water that was too deep, as we don't like fishing too deep for Perch and Zander. We headed to an area where we’d caught some nice Perch and Zander in the latter half of last year, and we were pleasantly surprised when some large arcs started showing on the sonar in around 16ft of water. We set up a drift over them, and shortly after, I had my first fish of 2019 in the net - a Perch of 2lb 12oz! 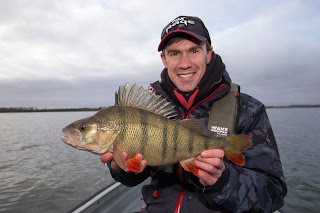 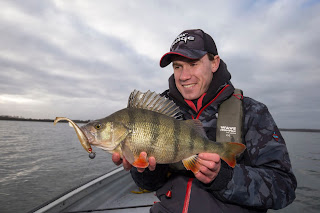 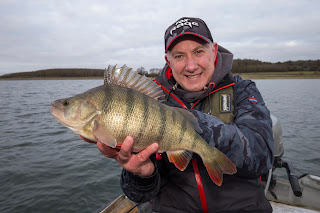 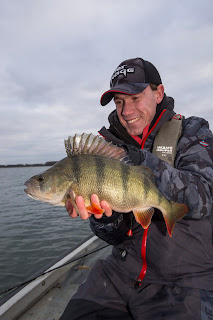 An important factor to take in to account is the size of lure, and after one of our Perch coughed up a smaller Perch, we knew we'd found the right size of shad. 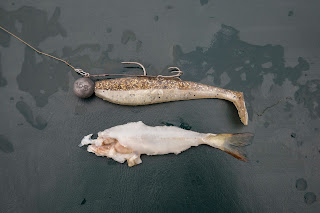 The days go frustratingly quickly in January though, not only because the days are so short, but this year, because the harbour was out of action, the wardens needed longer to prepare the boats for the next day, so by 2.45pm we were back at the dock unloading the gear.

We were absolutely raring to go back, so a boat was quickly booked for my next free day. That morning, we drove up to Grafham, but just before reaching the roundabout on the A1 where you turn off to go to the reservoir, I had a call from the lodge saying their boats had become unchained from the buoy during high winds the night before and were floating all around the reservoir, and a couple of them had flipped over, so they told us we couldn’t go out on a boat and would have to drive on to eiter Rutland or Pitsford. Not wanting to waste the day, we made a split second decision to go to Rutland. We were gutted as we had been so looking forward to returning, and to cut a long story short, the rest of the day turned out to be a bit of a nightmare!

Another few days passed before I had the opportunity to go back again. The fishing was made difficult by stronger winds than were actually forecast, which limited us to certain areas of the reservoir to fish, although I did manage to catch a Perch of 3lb 1oz. 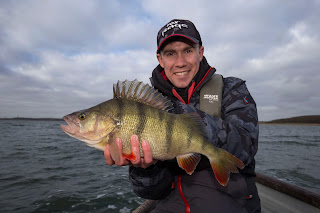 Despite only boating one fish, we were still confident that there were quite a few fish in the areas, as we had seen quite a few arcs on the fishfinder there, but weren’t able to fish properly due to the choppy conditions.

The next trip was exactly what we needed - almost flat calm conditions. We started in the area where we had found the fish on the last trip, but after a slow start with no bites and hardly seeing anything on the fishfinder, we decided to move to an area of the reservoir I had caught a nice Perch the week before. Whilst motoring along, I spotted a big group of sizeable fish on the sidescan, so Dad and I set up a short drift over them. 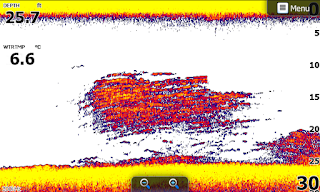 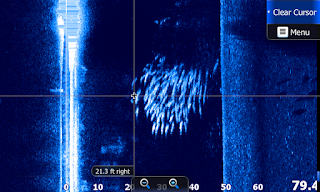 Casting 11cm Slick Shads in Ruffe, the first drift produced a Perch of 2lb 15oz, then on the second, I hooked in to this 4lb'er (46.5cm) - so stopping for a quick drift turned out to be a good call! 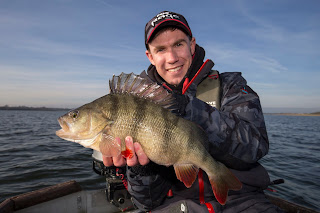 Later on that day, Dad managed to land a 44cm stripey, which was quickly followed by a Pike. 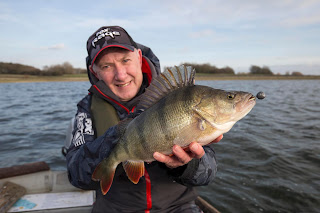 There was time for one last trip before the season on the reservoirs closed. It was a much tougher trip although Dad did catch two good Perch. The first took the ever-reliable Slick Shad, and the last fish was caught on a 12cm Zander Pro Shad in the new UV Pearl colour. 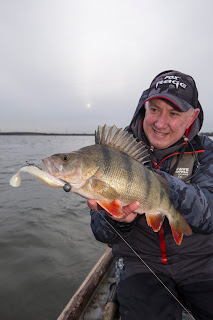 I really enjoyed those few trips on the reservoirs, but with just six weeks left of the river coarse season, we were now eager to switch back to rivers, and make the most of the remaining time we had. On our first trip back on the rivers, recent snowmelt had caused them to colour up - not exactly ideal conditions. In the past though, when the rivers have been high and coloured, we've often picked up some nice Chub on lures, so as neither of us had caught a Chub for a while, we decided to make them our target. We had one bite all day between two of us fishing, but at least Dad's fish was a nice one! 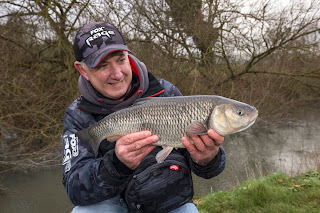 Over the coming days the rivers fined down and eventually became crystal clear. I often mention that my local rivers are not the easiest places to catch Perch, and over the years it has become progressively harder, but none of the previous seasons compared to how difficult the end of last season was. We had to keep trying different tactics and lures to save us from blanking, and before the heavy rain coloured the rivers up during the last week of the season, we often had to scale down to tiny softbaits to get any bites at all. Despite their small size though, the 5cm Micro Tiddler Fast in Stickleback, fished on a drop shot rig, was not only a blank saver, but helped my Dad catch this 3lb 13oz (46cm) Perch, which just goes to show that even small lures can catch good fish! 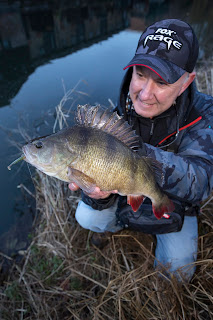 He also managed to catch a couple of nice Chub whilst targeting Perch. 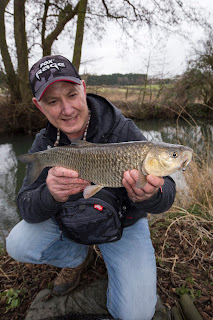 For a change from the rivers, we decided to have a day targeting Pike on a gravel pit, and although we didn’t catch anything large, we had some great sport, banking 12 Pike on a variety of lures. 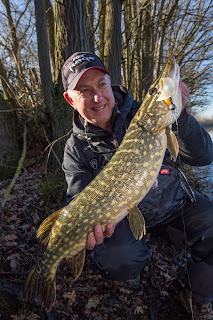 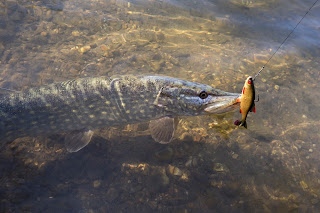 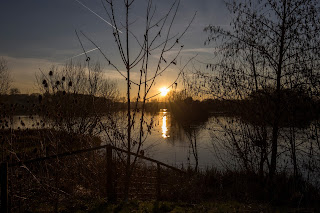 I had the last three days of the season off work, but I could see the weather was going to be wet and wild, and it certainly was! It brought with it a lot of rain, colouring up the rivers, which we actually thought would be a good thing after a couple of months of almost crystal clear water, but with it came some seriously strong winds. On the first afternoon of fishing, downstream gusts to nearly 50mph made fishing jigs extremely difficult, so we both switched to using crankbaits, so we could feel the lures working properly. 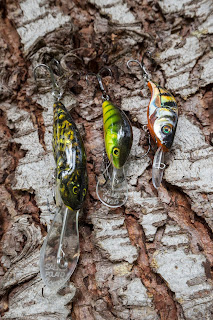 It turned out to be a good move - within a few casts this 3lb 4oz Perch nailed a Salmo Sparky Shad, fished on a twitch and pause retrieve. It was shortly followed by another nice Perch for my Dad, which took a 4.5cm Rattlin' Hornet. 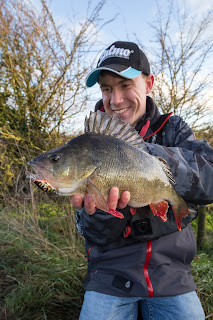 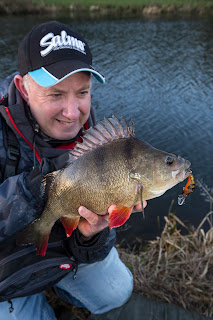 The penultimate day of the season was a bit of a disaster for us - despite fishing for most of the day, we hooked three fish but didn't land any! We just had to hope the last day would be kinder to us…

On the last day of the season, we planned to spend the morning targeting Chub, before moving on to Perch in the afternoon. Within a few casts my Dad thought he’d hooked a stick, and as he brought his suspected ‘stick’ up to the surface, it actually turned out to be a very big Chub! The fish then woke up from it’s otherwise dormant state, shook it’s head and the creature bait came flying out of it’s mouth. Normally, I find Chub absolutely slam lures, especially in coloured water, so Dad was very unlucky, as we both think that if he’d have had a ‘proper’ bite, he would have struck properly and not half-heartedly when he first thought it was a stick, getting a better hook set. It was a frustrating start the day, and we were praying for our luck to change. Another bite quickly followed from the same swim, but this turned out to be a Pike, which took a Salmo Bullhead. 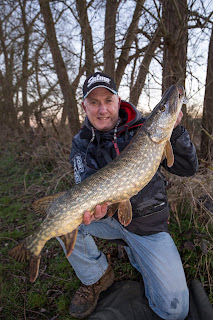 By 3pm, with the exception of another jack Pike, they were the only two bites we’d had all day. The wind had been relentless, so out of curiosity, we decided to try an area of river I’d only caught small Perch from before, but was fairly sheltered from the gale force gusts. Within three casts of arriving, a big Perch followed in my sinking 4cm Salmo Hornet. I paused the crankbait, watched the Perch circle it, and then suck it in - the most exciting take I’ve had from a Perch this year so far! It weighed 3lb 2oz, and would be my last fish of the river season. 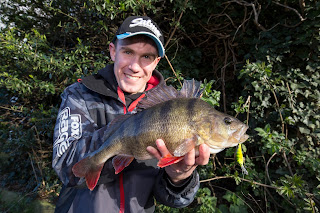 Since the end of the season, Dad and I have been mostly preparing for targeting a fish we've had on our bucket list for a long time, so we're crossing our fingers all the planning and preparation pays off!
Posted by Sam Edmonds Fishing Blog at 11:17 1 comment: