Perch on Plastics and the Pitsford Pirates 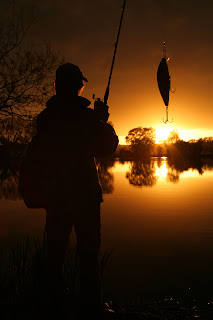 It's that time of year again when we begin to feel the first frosts, and leaves are falling in all their golden colours. The fish that sums up Autumn most of all, for me, is the magnificent Perch and it's hard to beat targeting them on lures and flies. The weather this past month hasn't been very kind though. If the rivers haven't been carrying too much coloured water, it's been blowing a hoolie, making reservoir fishing hard going. My Dad and I have had to cancel quite a few trips because of the wind, and I seem to spend so much time checking the weather, I think it's turning in to a new addiction! Second to fishing, of course... 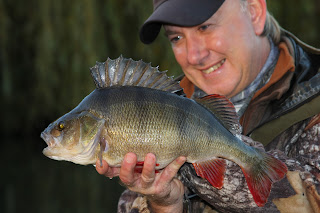 It hasn't completely stopped us though from catching quite a few Pike and Perch on the better days, including some cracking stripeys over the 3lb mark. The biggest of those I caught last weekend on the River Lea. It was my first bite of the afternoon, and weighed 3lb 8oz, taking a liking to my Texas rigged shad fished in a snaggy area. 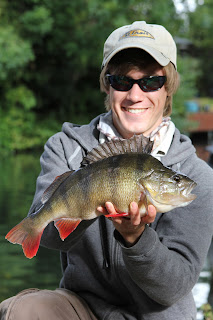 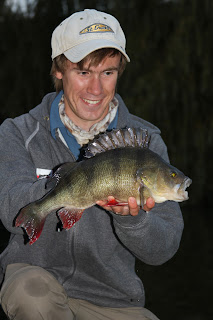 That same afternoon, my Dad lost a fish that looked bigger than mine, and may have even been a 4lb'er. He had the fish on the surface but just as it was going over the net it shook it's head and threw the trebles on his crankbait. We were both absolutely gutted!

Another place where we have caught some nice Perch recently is Grafham. We've fished it twice since I got back from Italy marshalling at the World Carp Classics. My Dad also fished it with Jack Simpson at the beginning of September whilst I was away, on the opening day of the predator trials. He had 3 zander to around 8lb and one perch, and said it was a difficult day. Even on the two days I fished it, the fishing was challenging but I managed to boat some good Perch and a couple of Zander, caught mostly drop-shotting split tails. We also had a couple of hours throwing big lures for Pike, but we only had one or two frustrating follows. 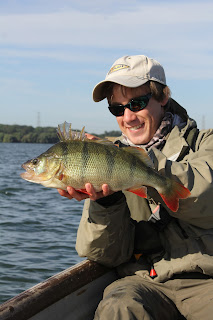 Back in August, at the EYFA Captain's Day match, I won a prize in the raffle. It was a ticket for two to fish Chew Valley from a boat. I'd never fished Chew before, so my Dad and I decided to make the 6 hour round trip last week and try flyfishing for the Pike.

Within half an hour of venturing out in to the 1200 acre reservoir, my Dad was playing his first Chew Pike - only a small one of around 8lb, but it was a good start. 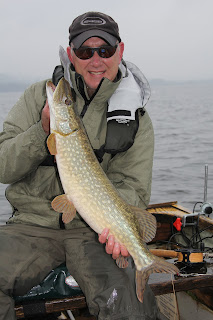 We were both feeling really confident, and fished hard all day, covering as much water as possible. Apart from my Dad losing another Pike, and me catching a couple of greedy Rainbows on big Pike flies, that was all the action we had. The conditions seemed perfect, and we weren't sure what we'd done wrong, but talking to a couple of locals when we arrived back at the lodge, it had apparently been fishing poorly for a few days. But that's fishing and I'm still really looking forward to trying it another day.

One afternoon we took our lure rods to a local gravel pit. Luckily, there weren't too many bivvies, so we were able to move about. It was gin clear and we had to wait until the last hour before the fish switched on, when we landed some nice Pike to low doubles on spinnerbaits and jerkbaits. Watching them follow you in and inhale your lure is exciting stuff! 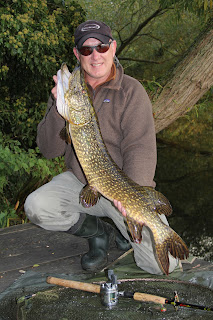 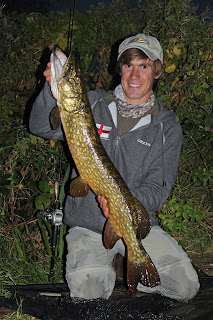 Fishing in Ireland with the England Youth Flyfishing Team a couple of months ago was, sadly, to be my last Youth International as I'm now too old. I really enjoyed being part of the team - it was a great experience for me. Not only did I fish with, and make good friends, but I learned much faster, and so much more, than I would have done fishing on my own.

I was really hoping that one day I could join another team, but I didn't think anything would happen for a while, if at all. However, Charlie Abrahams, a member of the Pitsford Pirates, phoned me with some brilliant news that they would like me to join their team. I already know four of them as they are also members of the Rib Valley Flyfishers Club, and I'm now really looking forward to fishing with them in matches next year.

Talking of the Rib Valley Flyfishers - on the 29th September, the Club had an open day on the Millennium Lake at Rib Valley Fishing Lakes. It was free for anyone who wanted to learn or improve their skills in flyfishing, pick up tips or even try and catch their first Trout. A few members, including me and my Dad, were there to help and give advice. Sadly, the conditions were almost identical to last year's Open Day - it was almost cloudless with bright sunshine, and the fishing wasn't easy, with few trout being caught. Apart from not catching many fish though, I think most newcomers went away learning something new about flyfishing.

To sum it up, the fishing's been tricky lately - but chopping and changing methods and using different lures and flies have kept a few bites coming. Hopefully, there'll be some good fishing to come in the next few weeks, before the Winter really sets in! 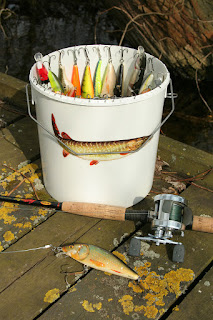