It's getting colder... but the fishing's still hot 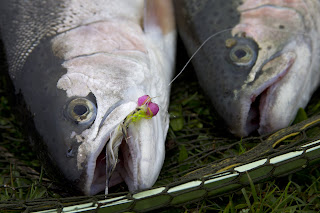 Since I first started my blog I have tried to write it about once a month, but unfortunately, this one's fallen a bit behind as it's been a very busy period. I've fished a fair bit over the last few weeks flyfishing for trout, jigging for zander, plus lure fishing for Perch on our local river. Not only that, I've also been fishing or netting lakes whilst at College - can't be bad, can it?!

As well as all of this, I've also just completed an ADB 1st4sport Level One Coaching in Angling course - I find out how I've got on in about two months time - I'm really hoping I've passed!

As part of our College course we have had to prove that we can fish all methods. So far, we have fished the stick float, feeder fished and ledgered on a variety of venues from small, fast flowing stretches of the river Ivel and Ouse to the College's own estate lake. There are still more trips to come and whoever catches the most species at the end wins 'The Golden Maggot' trophy. So far it's going well apart from losing a nice Carp on the College's estate lake a couple of days ago, the first Carp to have been hooked from the lake in a very long time and a species, I doubt, my College group and I will get another chance to fish for.

The trout fishing has been brilliant. At the end of last month I fished Pitsford in the Tom Bilson Memorial match, which was a great turnout - congratulations to Phil Longstaff on winning the match. Since then, I've had a couple of trips to my local Rib Valley lakes, and a bit further afield, Farmoor. At all of the venues I've visited since the beginning of November, the best methods that have worked for me have been either one of two approaches - a couple of boobies on a Di7, or a floating line coupled with a long leader, fishing the Washing Line method with nymphs on the droppers, and either a dry or small booby on the point. The latter method proved to work well a few weeks ago when Steve Cullen, the editor of Total Flyfisher, organised a new 'Winter League' match which would be fished at various venues across the country during the winter months. The first of these matches was to be fished at Elinor in Northamptonshire. I'd only ever fished Elinor once back in August, and my Dad had never seen it before let alone fished it.

When we arrived, everybody put in a pound which, at the end of the match, would be the prize and given to the winner with the most amount of fish. We headed off to our starting areas and I chose to fish up the top end of the 50-acre stillwater, where I'd fished in the summer with my mate, Ashley. I started with a floating line and a 16ft leader, with a red diawl bach on the top dropper, a UV cruncher in the middle and 'The Thing' on the point. On my second cast I hooked in to a fish on the cruncher and landed my first Rainbow of the match. It was very windy and difficult fishing into the wind, but I managed to land 8 more before the match ended at 3'o'clock. From what I'd heard, people had struggled, but there were 2 others that had also caught 9 fish, so there were three winners! Gary Owen took the bottle of whisky, whilst Charlie Abrahams took half the cash prize with myself. My Dad managed to catch 5 fish, mostly on minkies. Looking forward to the next one! 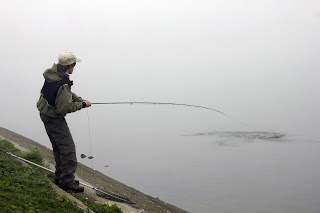 Our most recent trip trout fishing was at a venue where my Dad had been meaning to visit for quite a while. It was the first time he'd fished there since 2002, and he'd told me that the fishing at Walthamstow reservoirs could be challenging but very rewarding once you hooked and landed a fish, as they fought like stink and were normally a good size too.

We started off fishing the corner of the No.5 reservoir along the causeway. It was so foggy that we could only just make out the silhouettes of 3 or 4 other anglers not far up the bank as we arrived. We both set up Di7 shooting heads. I tied on a single booby on an 8ft leader, whereas my Dad used 2 boobies on a 12ft leader. On his first cast his fly was hit so hard by a trout, that when he struck into it, it broke him off. On his second cast he hooked and landed his first fish of the day, weighing 3lb 14oz. Not long after, I landed my first Walthamstow rainbow, another good 3lb'er. 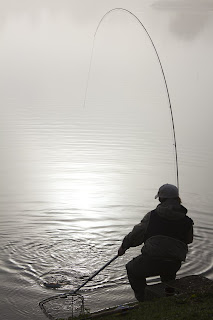 After catching 6 more fish we decided to move up to the other end of the causeway, to the water inlet joining the 4 to the 5, and there I had a cracking fish of around 6lb! 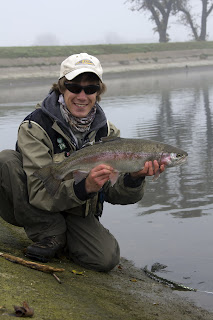 Roving along the banks of the No.5 produced another good rainbow for my Dad. Time was beginning to run out so we headed back to where we had started in the morning, my Dad changed over to a floating line with a black buzzer on the dropper and a bloodworm on the point. These were a couple of the food items we had found in fish that we had spooned that the trout were feeding on, and as the day progressed they'd moved up in the water. By the end of the day we landed 19 super rainbows. It looked like we'd timed our visit well as we'd heard the reservoirs had been fishing really hard, but after stocking them a few weeks earlier, not only were the newly stocked fish feeding, but it had also switched on the bigger resident fish.

Probably my favourite species to target at this time of year though, are Perch. Our recent trips jig fishing have been trying to hunt down large stripeys along sections of our local river, the River Lea.

Although it's getting colder, it has been, for November, one of the warmest on record - but the sport has been great. We've caught some lovely Perch mainly on shads and small plugs, despite the low, clear water and the fluctuating weather conditions. Yesterday saw the first 'sharp' frost in Hertfordshire, but we still managed to catch Perch first thing in the morning even though the outside temperature was reading -4°C in the car! It was a good day and we landed 17 Perch to 3lbs exactly. Over a few trips, my Dad and I have banked plenty of good 2 pounders and 11 over 3lb, the two biggest weighing 3lb 11oz. 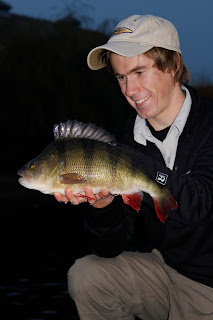 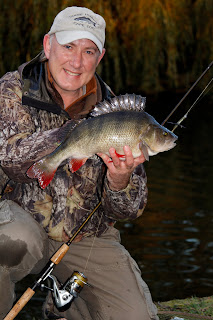 Although my Dad and I haven't really fished for Perch on the fly for a while, I had an article published in December's Total Flyfisher about targeting big stripeys with fly gear. I haven't caught a really big stripey from the Lea yet on a fly but it is something I intend to try and do in the coming months. 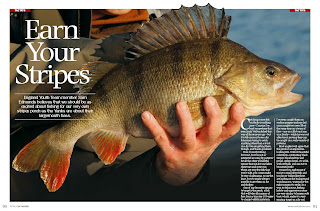 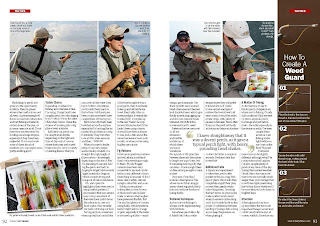 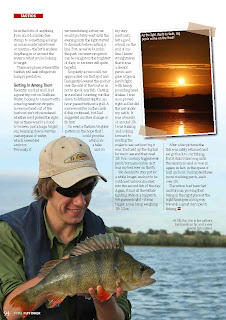 Another trip that I'd almost forgotten about was Zander fishing at Grafham. It was a really tough day. Unfortunately, I lost the first two fish I hooked, and we only managed to catch 2 around 7-8lb. My Dad did have a nice Brownie though weighing 5lb 13oz which took his jig on the drop. 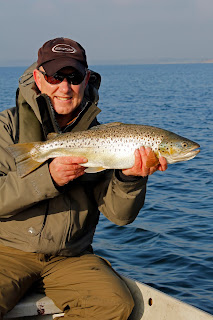 I'm hoping December won't be too cold, like last year, so that we can get out as much as we can. Maybe we might try and get a couple of trips in on the Thames or try somewhere completely different.
Posted by Sam Edmonds Fishing Blog at 11:36 1 comment: