Pursuing Pike and Perch in the run up to the New Year... 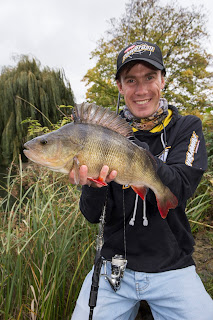 It’s been quite a while since I’ve updated my blog, so this post is a summary of the fishing I’ve done since October. I haven’t fished any reservoirs for predators for a couple of months now - most of my fishing has been spur of the moment trips, targeting Perch on rivers and Pike on a couple of large gravel pits.

Back in October, Dad and I joined a syndicate that consists of some huge gravel pits, that we’d heard had produced some good Perch. It’s always exciting joining a new syndicate, especially when you’ve heard rumours of big fish that have been caught from the venues, although this wasn’t the first time my Dad had fished these gravel pits. Back in the 80’s and 90’s, along with a few mates, he used to fish the pits for Carp, where, between them, they caught some cracking fish, so he was excited to rejoin and relive some old memories! He also caught some nice Pike there during the winter months on lures and deadbaits, which I was keen on targeting with larger lures. We weren’t expecting it to be easy, but we like a challenge! 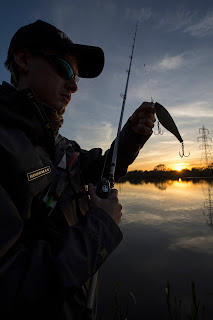 Our first trip was a bit of a disaster, as an algae bloom made visibility poor, and it was not what we were expecting as the gravel pit is normally gin clear, although a jack Pike saved me from a blank. On our second outing, which was an afternoon trip for about two hours at the end of the day, shortly after catching a jack Pike, Dad had a big Perch follow his crank bait in - I didn’t see the fish, but he reckoned it was well over 3lb. Frustratingly, so far, that’s as close as we’ve come to hooking in to a big Perch there. Dad also had another Perch of around 1lb follow him in on the next trip, but it’s the big Perch we’re hoping for.

One evening, I hooked a fish at around 40 yards jigging a Berkley Havoc Sick Fish Jr. It felt like a big Perch at first, especially when I first hooked it at long range, but it turned out to be a Pike of around 8lb. As I netted the fish, it coughed up a Perch, and amazingly, the Perch was still alive! Both fish swam off fine - that Perch had a very lucky escape! 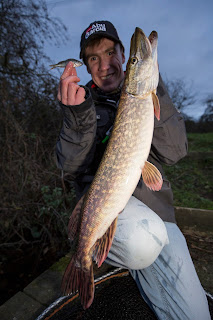 We’ve also had a couple of trips on another of the gravel pits, targeting Pike with bigger lures. On our first trip over there, I had a very big Pike follow my chatter bait in - it must have been 22-23lbs. I let the chatter bait fall to the bottom and the Pike sucked it in right at my feet - I struck, and the lure came flying out of the fish’s mouth, and it spooked! I was really gutted, although I did manage to land a nice Pike later on in the day on a jerkbait, and between us, a few others over the course of a couple more trips - Dad landed the biggest measuring 102cm. 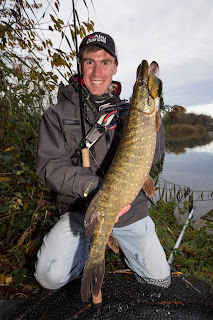 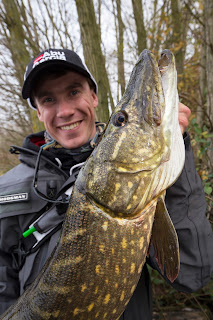 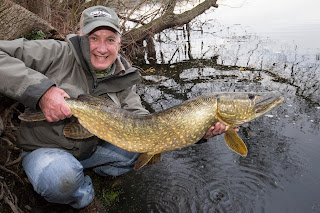 Probably my favourite venues to target big Perch are on rivers, but unfortunately, my local rivers have fished really hard. I did get lucky on a mornings fishing at the end of October, where I managed to catch two nice Perch within the space of about half an hour. As I was about to lift my Texas rigged creature bait out of the water ready to make another cast, a good Perch zoomed up and took the lure at the surface - I struck, and unfortunately, the hook didn't expose. The fish was still there so I dropped the lure back in - it slammed it again, I struck and the lure came flying out of it's mouth again! As I was checking the hook, a leaf fell in to the water and amazingly, the Perch took the leaf off the surface, so I lowered the creature bait so it was sitting on the surface and gave it a couple of twitches, then the fish turned round and took it again - third time lucky and this 3lb 2oz (42cm) was mine! 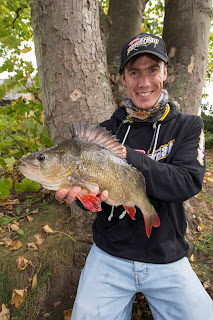 The morning was about to get a lot better, as this fish was shortly followed by a much bigger one - an immaculate stripey weighing 3lb 11oz and 46cm, which is my biggest of the season so far - hopefully there are more to come!

Over the next month we had a couple more short afternoon trips, and although the bites were few and far between, we caught a couple more nice Perch, as well as a nice Chub that fell for a Rocket Craw. 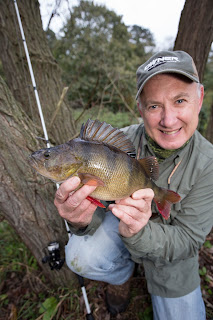 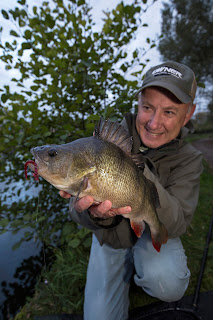 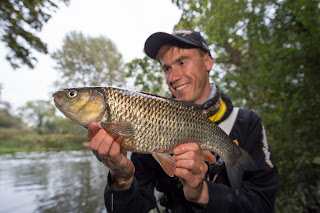 One evening, we returned to the stretch where I caught the 3lb 2oz and 3lb 11oz and found that the river was very coloured. We weren’t expecting it to be coloured, so I changed to a white Rocket Craw and caught four Perch in the last hour and a half. I prefer not to have re-captures but this 46cm stripey seems to have a liking for creature baits! 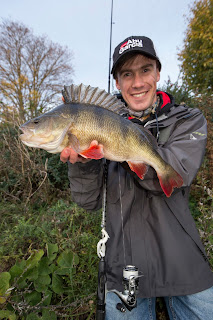 About three weeks later, we had a few inches of snow, which melted quickly after raining a couple of days later, and gave the rivers some extra water we desperately needed. As the colour was dropping out of the river,  Dad and I planned to make the most of the ideal conditions and target the Perch. Our first afternoon trip was when the river was still quite coloured - I only had one bite that afternoon, but it was a nice Perch that took a twitch tail drop-shotted beside a boat, which coincidentally was called Sam! 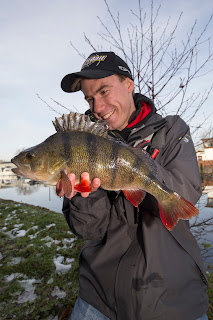 We had another three short afternoon/evening trips after that, but despite the perfect conditions, in three trips we had just two bites - however, one of those was well worth venturing out for! This year, my Dad has had bad tennis elbow, and despite having a cortisone injection in the summer, lately his arm has been playing him up again. Before fishing one afternoon, Dad asked me if he could use my 7’ Villain spinning rod and Revo STX20 reel, which is a fair bit lighter than the set-up he normally uses, so we swapped rods. Once we were fishing, because of the low light and coloured water, Dad decided to change to a brightly coloured creature bait, fished on a cheb rig with a 3g head. Not long after changing, Dad hooked and landed an immaculate Perch weighing 4lb 1oz - an early Christmas present! 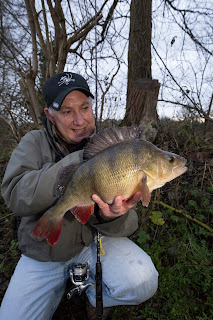 The winter months are normally quiet for Get Hooked on Fishing, but since the beginning of December I’ve been running Get Back in to Lure Angling sessions for GHoF, in conjunction with the Angling Trust and Environment Agency. The scheme is aimed at lapsed anglers who would like to try fishing again. I ran three sessions before Christmas, and on the first of those we decided to mainly target Perch. The fishing was really good and quite a few Perch were caught up to 2lb 2oz.

A couple of days later, Dad and I went back, this time fishing ourselves. About 15 minutes after starting, I hooked in to a good fish, which I thought was a good Perch at first, but it then made a long run and I then realised this wasn’t a Perch - it turned out to be a Carp! 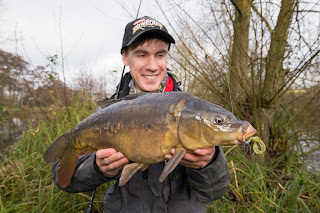 Thankfully we went on to catch a few Perch later in the day... 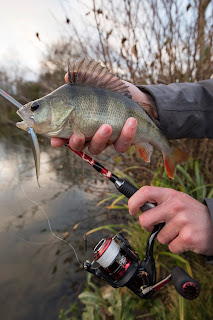 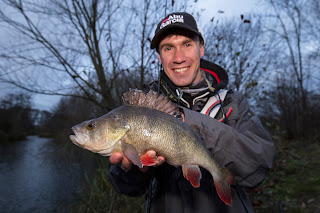 For the next two Get Back in to Lure Angling sessions, the lake where we normally target the Perch was frozen, so we mainly targeted Pike on the big lake. With crystal clear water and both Saturdays being bright and sunny, the conditions made the fishing hard. At the end of the most recent Get Back in to Lure Angling session, I decided to have a few casts with a jerk bait, and on my third cast I saw a Pike miss my lure - I kept on retrieving and it engulfed the lure almost at my feet! It turned out to be a lot bigger than I first anticipated, weighing 21lb 5oz and measuring 108cm! 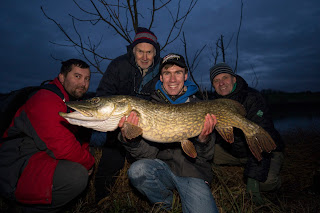 On the day before Christmas Eve, I had a trip to Grafham flyfishing for Trout from the bank with the Pitsford Pirates. We normally have a get-together around Christmas time and I was really looking forward to catching up with them, as it was the first time I’d fished with the team for a good while. As always, we had a great laugh and the fishing was good too, with lots of hard fighting Rainbows and a couple of nice Browns being caught.

Both my Dad and I have been very lucky to have spent some good times fishing together, and with friends during 2017 - we’ve learnt a lot and caught some very special fish along the way too. Happy New Year to everyone and tight lines for 2018! 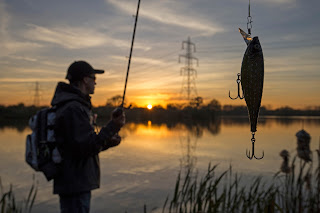