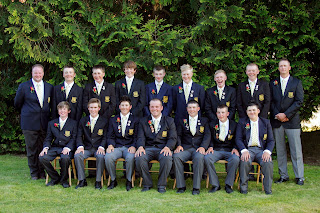 I would never have dreamed that one day I would be representing my country at fishing, but last year I managed to qualify for the England Youth Team. One year on, and I have just returned from the Lake of Menteith in Scotland representing England in the Youth International. 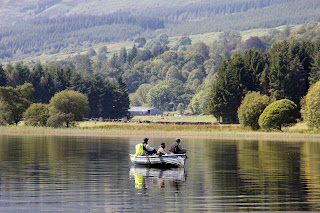 After a nine hour car journey, we arrived at Menteith, a very picturesque venue in the Trossachs, and met up with the rest of the team, Carl, our coach and Phil, the manager. Some of our lads had fished the day before and despite the bright, hot conditions (hardly what we were expecting in Scotland), they'd caught quite a few. After a team talk and discussion of tactics to fish the following day, we and the other nations were welcomed by the Scottish Youth Team President and the Mayor of Stirling at dinner in our hotel, The Rob Roy. Then it was off to the pool table for countless games of Killer! 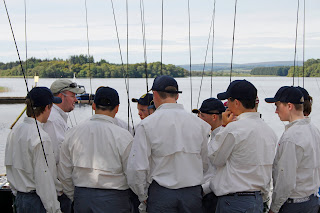 The next morning we were up bright and early for my first practice session. I was partnered with Ryan Worker, our team's captain, who had fished the day before too. I fished a slow glass line and he used a midge tip, both trying various different flies trying to work out what the fish wanted. Covering different areas across the lake, by the end of the day we'd boated 11 fish on booby variants, buzzers and diawl bachs. But most of my fish were caught on a fly my Dad ties, which works well for me on other venues - the team nicknamed it 'The Thing'! Ryan also had a Pike about 3lb and a double hookup of small Perch! We had a great day out with plenty of action - cheers Ryan! The important thing was that the team had a rough idea where the fish were located, how deep they were and what flies they were taking. We packed up about 5pm and after another team discussion and dinner, it was time for more Killer! 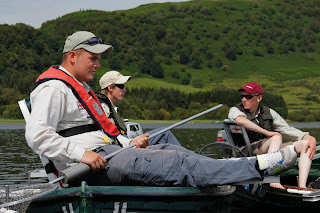 For the second practice session I was partnered with Oliver Avis and Phil Longstaff (the team manager), who was our boatman. Today would be about fine-tuning methods and catching a few fish to boost the team's confidence even more. We caught 9 between us in a 4 hour morning session, on similar tactics to what we'd used on the previous day. We had a really nice fish each, which Phil reckons were both getting on for 5lbs. My fish had actually ended up taking the top dropper whilst my point fly was hooked in a reed! We packed up early to give ourselves time to tie leaders and flies, get tackle ready and chill out before the match the following day.

That evening we were presented with our England Caps, roses, badges and ties by Phil and the committee - a really proud moment! The boat draw also took place and I had been picked to fish with Patrick McKenna of Ireland. After one quick game of Killer it was off to bed for some rest.

Match day arrived. All kitted up and raring to go, we got on the team minibus straight after breakfast and headed for the Port of Menteith. After setting up our tackle in the boats, we lined up alphabetically in our squads and paraded behind a bagpiper which led the teams down to the shore of the lake. We were surrounded by hundreds of people cheering their countries on, clapping and flying flags from all the nations - an experience I will never forget! 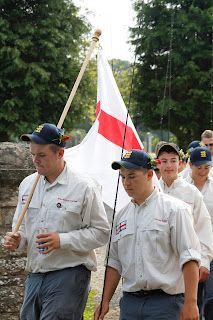 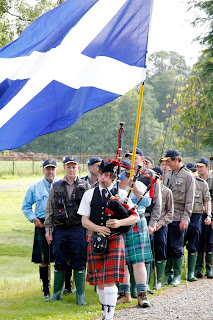 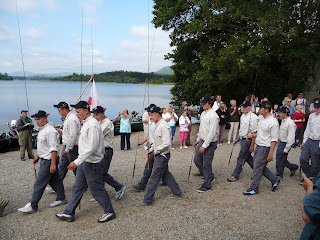 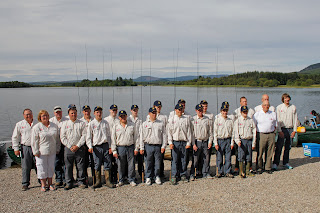 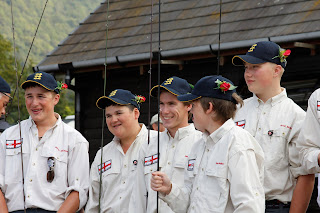 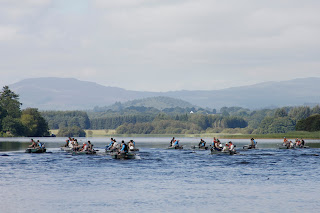 Along with Ryan Worker aboard another boat, I'd been asked to try the Malling Shore first before heading off elsewhere - an area where I'd caught from the day before. I'd set up with a midge tip and had a pull on my first cast on the hang, but after nearly an hour we both decided to zoom off to Gateside and the Cages where most of the activity was taking place. At 11.30, I got my first trout in the boat on a sparse blob fished on the hang.

There wasn't a cloud in the sky and temperatures were pushing 30°C, with NO wind - the lake was like a giant mirror. My impression was that the fish would go deeper. The sport began to dry up for the fleet, but I found that fishing a buzzer on the midge helped me catch. With no wind, it allowed me to hang my team of flies vertically below the boat after each cast for as long as 2 or 3 minutes, without getting slack line - I think I was probably hanging them in about 25ft of water. The bites were awesome - the rod just bent over and locked up! 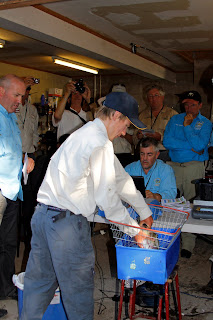 The match finished at 5pm and I'd had 6 fish and lost one. They were all caught on buzzers apart from one which I caught on 'The Thing', from the Rookery, Gateside and the Cages. After a long, tense weigh in we heard the disappointing news that we'd only come 3rd with 41 fish, but well done to Scotland for hosting the event and getting their tactics spot on, winning with 68. Wales were 2nd with a great performance catching 48 and Ireland came 4th with 29. It was great meeting the other teams. Well done to Oliver Avis from our team for getting top rod with 8 fish and to Fen for catching the biggest fish! We all fished our hearts out and I'm proud to be in a team with such a great bunch of lads. Thanks very much to Phil and Carl for all the hard work they put in. Also, a big thank you to Bobbie and everybody on the Committee. Well done to Ryan too, who had his last year in the team, and who we all thought was an excellent captain.

After the match we were all presented with our medals and others with their trophies. After a big meal the banter went on well in to the night and we had a great laugh with the other teams.

The next day, after saying goodbye to everyone, my Dad and I fished an afternoon for Pike on the fly. We'd heard of so many being caught accidentally during practice, it had whet our appetite too much. The weather completely contrasted the day before, with rain and cloud. Covering many different spots we caught 41 Pike and 2 Perch between us. It was great watching the Pike fly out from the reeds and whack our flies! I've never caught so many in an afternoon!

Well, although it wasn't the result our squad had hoped for, it was an awesome experience I'll never forget. Now I can't wait for Ireland next year!