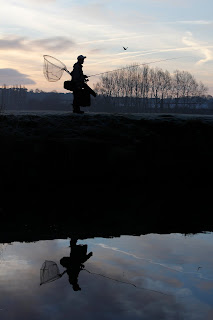 Back in November, I attended a two weekend course to try and gain a Level 1 ADB Coaching in Angling qualification, as I'm very interested in becoming a fishing guide or coach. I've just received a certificate in the post saying that I have passed, which was great news! Hopefully, in the next few months, if I can get some practice, I will try for the Level 2 qualification, but I know this will be a lot harder to achieve.

Just over a week ago I had my College half term, so I was able to fit in a bit more fishing than usual. However, because of the extremely cold weather, most of my local rivers were frozen over - only stretches that had a good flow were fishable. My intention was to fish for Perch, but because of the ice, that was out of the question. I didn't want the ice to stop me from going, so instead of jigging for Perch, my Dad and I decided to target Chub on parts of the Lea that hadn't frozen over. 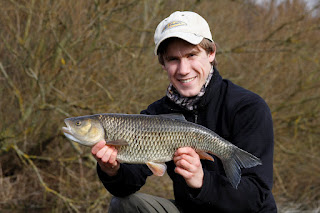 It's always exciting quivertipping for Chub, so I was really looking forward to our new plan. The first few days of half term were unbelievably cold, so we fished short sessions, starting late in the afternoon and staying a couple of hours in to dark. Considering the sub-zero temperatures, we managed to catch a few nice fish, landing Chub up to 4lb 11oz, some nice Bream, to just over 5lbs, a Common Carp and a beautifully marked Brown Trout.

As the week progressed, it began to warm up and the ice eventually disappeared, so we were able to get back to what we'd originally planned at the beginning and lure fish for Perch. The water temperature was still extremely cold, but it didn't stop a few fish from feeding, and on one afternoon trip, managed to land 4 Perch and 2 Pike. The biggest Perch I caught was 3lb 1oz, caught on a curltail. 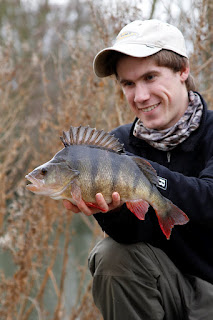 We decided on my last day of half term we would have another go at trying to catch a big chub, so the evening before, we thought we'd introduce a few free offerings of cheesepaste and bread. Afterwards we would then try and catch a big perch that I'd mentioned at the end of my last blog that my Dad had lost.

We got to the area for the last hour of light and it didn't take long to hook that perch, as I caught it on my first cast!!! We're pretty sure it was the same fish, as there aren't many big ones in that area. It was a cracking fish but didn't weigh as much as we thought it might have done - the scales read 3lb 3oz, but it did look quite a lot bigger when it was lying in the net. Sometimes they can be deceiving! However, it was still a great fish, so I wasn't moaning - but my Dad was, as I'd caught his fish! Sorry... 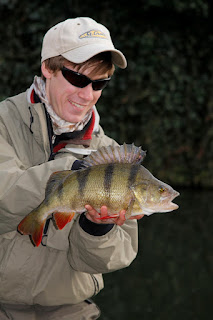 Returning to the areas that we'd prebaited was well worth the effort as I caught a new P.B Chub of 6lb 1oz; and what a great looking fish - it was immaculate. 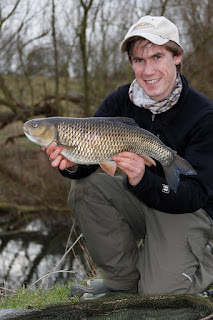 Between us we also caught 3 more Chub to 4lb 11oz, plus a nice Brownie, all caught on quivertipped breadflake. We had another trip the following weekend to the same area, and I managed to catch 2 more nice Chub, weighing 5lb 7oz and 4lb 10oz. My Dad also caught one slightly smaller too, again all on bread.

A couple of days later, the weather looked perfect for some jigging - overcast and mild. But, although the conditions seemed perfect, the Perch didn't want to play ball, and we only managed to catch 2 of around 1lb 8oz each. We did catch 3 Pike though, and one particular fish that my Dad caught surprised us both. Normally, when we're jigging for Perch on the Lea, most of the Pike we catch are Jacks - sometimes, if we get lucky, maybe catch a scraper double. What we thought was a big Perch turned out to be a 17lb 13oz Pike - a fantastic fish, which had taken a small, jigged shad, and was also a P.B River Lea Pike for my Dad. That's why I'd always recommend using a trace, even when Perch fishing. 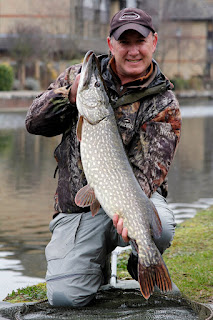 Last month, Total Flyfisher kindly published another article, which I wrote about a great trip to Walthamstow Reservoirs flyfishing for Trout, so if anybody is interested in fishing the Stow, I've pasted it here: 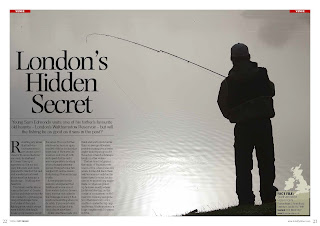 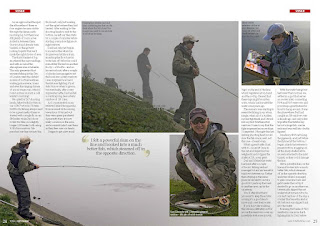 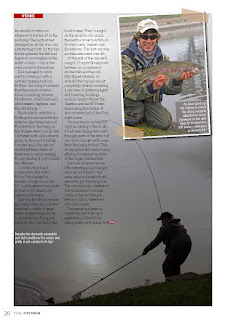 Yesterday I was at the Carpin' On Show at the 5 Lakes resort near Maldon in Essex. There were lots of big names there in the fishing world and I spoke to a few such as Jerry Hammond and Les Webber MBE. I was with Shuttleworth College helping out on their stand and although I don't do a great deal of Carp fishing (and when I do it's normally on the fly), I found the show very interesting. 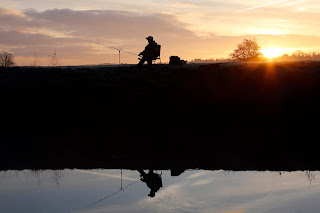 We haven't quite made up our minds what we'll be fishing for yet for the last couple of weeks of the season, but I'm going to try and make the most of it if I can!
Posted by Sam Edmonds Fishing Blog at 03:52 1 comment: