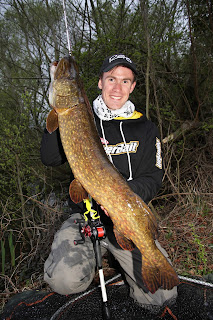 April can be a strange month for targeting predators with lures. Sometimes Pike are still spawning, and Perch normally spawn at some stage throughout the course of the month too, so fishing can be challenging. The Pike spawned a little later this year (in my area, that is) and whilst this was happening, Dad and I had a few trips fishing a local gravel pit and whilst I targeted the Perch with lures, Dad decided to have a change from the lure fishing and target some of the lake's immaculate Roach by quivertipping. 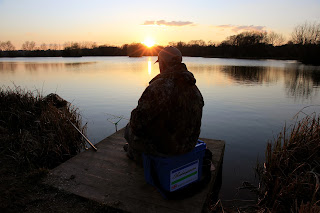 It's nice to do something different every once in a while and a lot of gravel pits, particularly those that are mainly fished for Carp, often hold good specimens of other species, particularly Roach and Perch, by growing big on bait used by Carp anglers, and thriving on neglect. 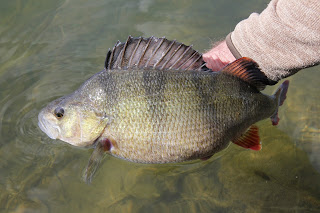 We both caught some nice Perch, mine on lures whilst Dad caught some beautiful stripeys to just under 3lb whilst targeting the Roach, mainly with red maggots. 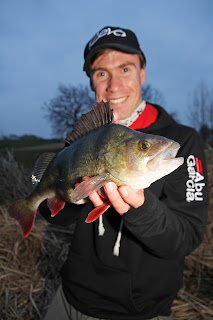 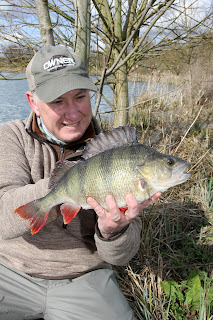 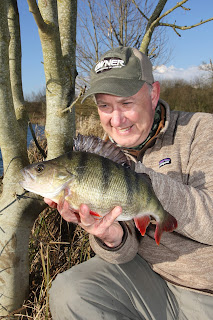 Many of the better Roach Dad caught came as the light was fading, or an hour or so after dark, and all the fish we caught, including the Perch, were immaculate - they looked as if they'd never been caught before and their colours were so vivid, enhanced by the gin clear water in this gravel pit. 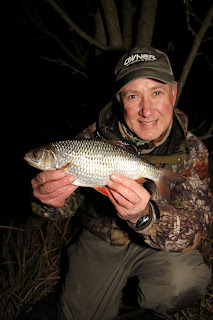 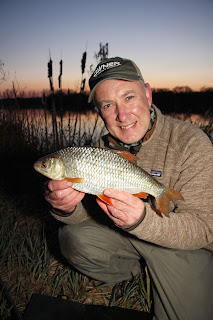 After a few trips, the fishing began to get harder and on one particular evening, the only fish we caught, a Perch of around 1lb 8oz, was attacked by a nice Pike that was extremely fired up. We decided that this would be our last trip for a while fishing for the Roach and Perch, and switch back to targeting toothier species.

Our next trip was on the Grand Union Canal targeting Zander with Dan Brackley. It was the first time we'd fished together since the Lure Fishing World Championships in France in 2014. The fishing wasn't easy though - it was a glorious day with bright sunshine, but that came with a price. As it was a Saturday, there were barges going up and down the canal every couple of minutes and whilst it can often be a good thing by disorientating silverfish, which the Zander take advantage of, when boat traffic is as busy as it was on this day, it works the other way round. We all caught a few fish though, along with a couple of nice Perch - Dad caught the biggest of the day. 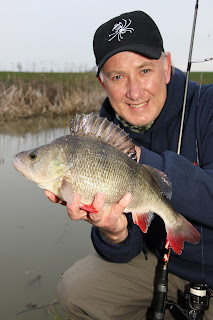 Dan is a great angler and great company too, and I'm looking forward to fishing with him again soon in Holland in the Predator Tour - we'll be heading out there at the end of this month and I can't wait!

Back to the gravel pits, and with spring finally arriving, I thought it would be a good time to try out the new Berkley Powerbait Kicker Frog, new to Berkley's UK range for 2016. The only place I'd tried it out beforehand were in the lure tanks in Glasgow Angling Centre and at 'The Big One' show back in March, but it did give me a chance to experiment with different retrieves. After hours of casting and retrieving in a tank with no fish, I was itching to try it out somewhere that did contain fish!

We tried it out for the first time on a huge set of local gravel pits. The fishing there isn't easy by all means (and that accounts for every species that inhabit the pits), but there are some good Pike lurking about in there, if you can find them, and the venue seemed perfect for the Kicker Frog, being shallow, mostly reed fringed and with lilies beginning to emerge.

It took just five casts to catch a fish on the frog - not a monster, but it was great to christen a new lure! 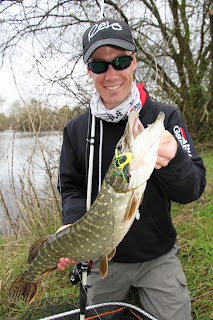 Unfortunately though, the second fish I caught on the frog hit the lure so aggressively it ripped the legs off, and it was the only one I'd brought along with me on the day! I thought I'd brought more than one with me, but I'd left the others at home!

It turned out to be my best day numbers wise on the pits, with five Pike banked in a few hours fishing, although nothing big. There was one particular fish that followed my jerk bait in and watched my lure as I deadsticked it for two minutes - I managed to film it on my GoPro and you can just about make out the Pike as it eyes up and takes the lure!


Dad also caught a couple of better Pike, and experienced something we've only ever encountered before with Carp. After hooking in to a nice Pike of around 10lbs (the fish on the left of the photo below), the fish on the right followed it in to the net! 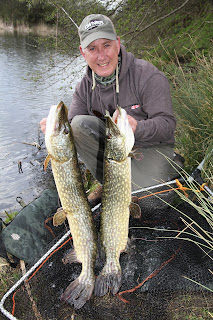 Over the course of a few trips fishing a few different venues, we caught some lovely Pike to around 15lbs on the Kicker Frog. Below is a video I've put together of a few fish caught on the frog, plus a few rigging options too:


Between us, Dad caught the biggest Pike of the month. After walking around the huge gravel pits I'd described earlier with only one jack Pike between us and a few half-hearted follows, with just an hour to go before dark Dad spotted a very nice Pike in the margins. He decided to quickly change lure, and even move in to a different swim to get the perfect cast. They weren't really proper swims, as this venue is very wild and there was a steep drop of about 5ft down to the lake fringed by thorn bushes, so as all this was all going on, I had the net on the ready, but the pole extension had become jammed and I was trying desperately to pull it out so it could reach the water. Dad's move paid off and seconds later he hooked in to the fish, so I had to try and get to the fish, but ended up slipping down the bank and in to the thorns - but I netted it, and that's all that mattered to Dad! 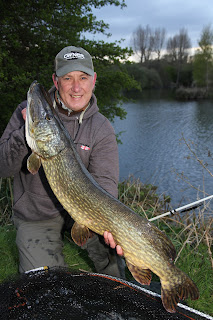 This April was very busy with Get Hooked on Fishing, with two Family Fishing days taking place at Rib Valley, and one last weekend at Thames Water's Walthamstow Angling Academy, along with 'have a go' sessions on most Sundays throughout the month. These events, which have been a huge success, would not be possible without the help of those who have volunteered for us. There are too many names to list on here, but I can't express how vital they are in helping the charity give people the opportunity to fish, often for the first time, so an enormous thank you to all our volunteers!

To round this blog post off, I often read features in magazines, articles online and chapters in books, with the aim to try and improve my fishing, but very rarely do I see something that isn't a 'how to' and instead recalls unusual, funny and fascinating stories that we experience when fishing. I already have a copy of Dominic Garnett's 'Flyfishing for Coarse Fish', which I really enjoyed, and in a way Dom and I are quite similar as we both love catching different species of fish in unusual places on lures and flies, and whilst it is nice to catch big fish, that's not always what fishing is all about, and Dom reiterates that in his latest book 'Crooked Lines'. Dom has a great gift of getting back to basics and portraying the atmosphere and experience in words - blood, sweat, tears and all. Once you start reading 'Crooked Lines' it's very hard to put down, and that's down to Dom being one of the best creative fishing writers around. I would thoroughly recommend reading his new book! 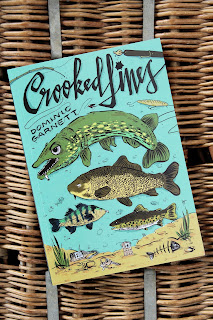