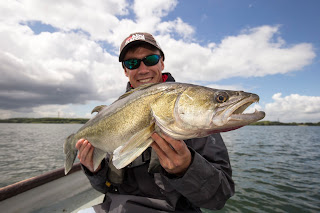 Every month I try to update my blog, but unfortunately I’ve let it slip recently and I’m now playing catch up for May and June! I was aiming to get this post up before the start of the river season, but I’ve had a very busy month or so, which has delayed this blog post. 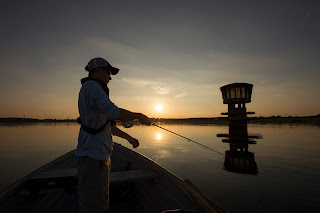 My Dad first fished Grafham for these species on the fly back in 2001, and quickly learnt that there was some fantastic fishing to be had, especially for the Zander, which he soon became fascinated with. At the time, flyfishing for Zander was quite new, so experimenting with fly patterns was quite important, and creating flies that work well for the species.

All four of the reservoirs have the potential to break the British record for Pike and Perch, but Rutland and Grafham also have the added bonus of producing a monster Zander. Although Dad and I haven’t caught any of the real monsters, between us we’ve caught around 50 over 10lb to date, with the biggest weighing 14lb 9oz. I’m sure we’ve probably hooked and lost a couple though over the years!

The take from a Zander can be pretty awesome at times - you can almost feel the fly being engulfed in to their jaws, and any zed over 5lb will give you a good fight on a 9wt, with lots of hard, dogged headshakes, plenty of lunges and sometimes even some uncharacteristic runs, like a Pike. The three species actually all fight quite differently to each other, and we can usually tell what species is on the end of our line before we’ve even seen the fish. 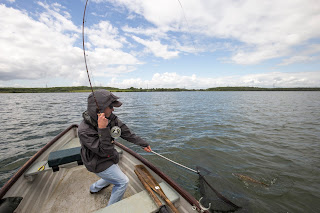 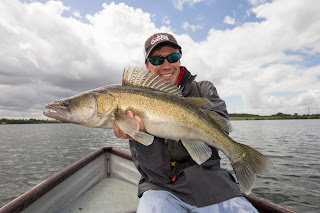 Dad and I managed to fish on the first day of the new predator flyfishing season, but the conditions weren’t on our side - 17mph westerly winds were not what we’d been hoping for. We started off flyfishing for Zander, and it didn't take long for us to land a couple of nice zeds. After an hour and a half though, the wind got so strong that it became dangerous and almost impossible to cast, as we were struggling to keep our balance as the big waves were rocking the boat around all over the place! With the wind speed increasing we decided to head for calmer water, closer to the bank. During May you can find the Pike in relatively shallow water, so for most of the day, we mainly targeted Pike, something which we also really enjoy for the first few weeks of the new predator flyfishing season. The first few hours were pretty quiet, then I had a follow from a good fish, which turned away at the boat. About an hour later Dad also had a fish follow him in, but this one slammed his fly! 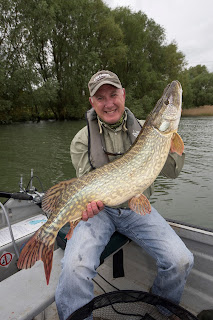 Not long after catching the Pike, Dad also caught a Zander in just 6ft of water on his floating line. 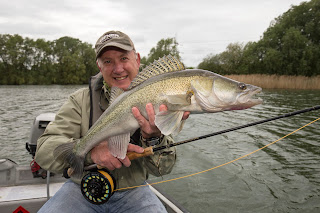 We didn’t have any more action for a few hours, so for the last couple of hours, as the wind was calming down, we decided to switch lines and target the Zander again, and managed to add a few more fish to our tally for the day, including a Perch which Dad caught, to complete what we call a ‘Grafham Grand Slam’ - Pike, Perch and Zander all in the same day! 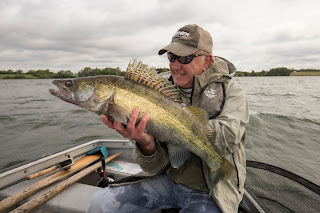 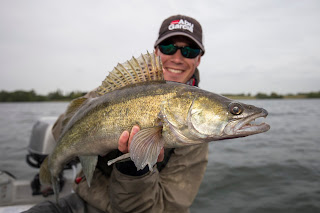 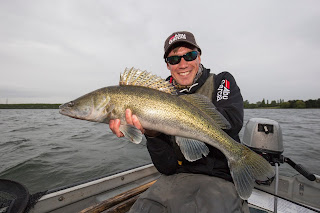 On our next trip, we decided to concentrate on fishing for the big Pike, hoping that we may land one even bigger than Dad’s fish on our last trip. 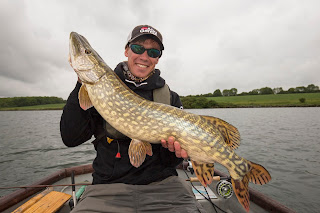 We had a slow start, with just one scraper double in the first 8 hours of fishing, but then, at around 4pm, I was stripping my line in ready to make another cast when I felt some resistance, that felt more like weed than a fish. I halfheartedly struck anyway and the ‘weed’ started to headshake! I’d hooked a very big Pike, but after the first few headshakes it zoomed away from the boat, and as I thought I had it under control, it came off! I was gutted as I knew it could have been quite a special fish, and it was beginning to turn in to one of those days where it all went wrong, as Dad had also lost what we think was a big Zander earlier in the day whilst fishing for the Pike. After another hour of no more follows or takes, we decided on having a change of plan for the evening and targeting Zander instead. It turned out to be a very good move…

In four hours of fishing, we landed 18 Zander, with the biggest weighing 11lb exactly, along with a couple of Perch. Not only did I manage to catch my first double figure Zander of the year, but it meant that I’d also caught my first ‘Grafham Grand Slam’ of the year too! 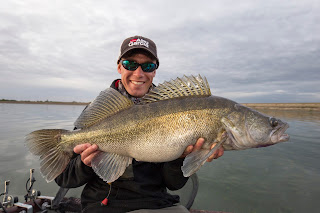 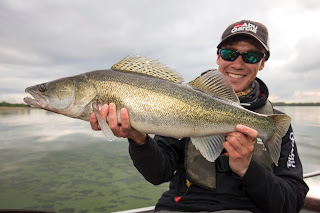 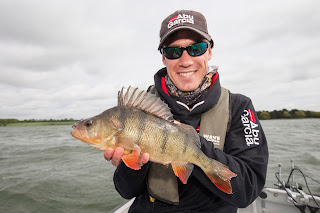 Over the following few weeks we managed to squeeze in three half day trips, and landed some nice Perch and Zander, along with my biggest zed of the year, which was caught almost accidentally really. We were fishing on quite a rough afternoon and I’d made a cast, which had ended up in a tangle. There was only a short length of line out from the rod tip so I started to undo the tangle so I could make a better cast, when ten seconds later I felt a savage take, instinctly struck and hooked in to this 12lb 11oz zed. It wasn’t the prettiest looking Zander I’ve ever seen, in fact I’ve never seen one that’s looked so tatty! 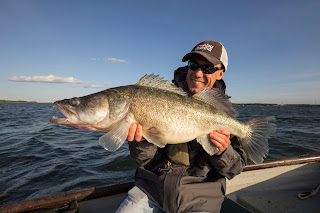 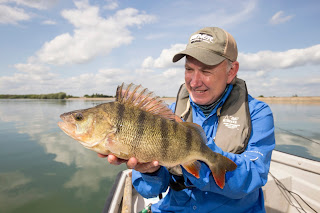 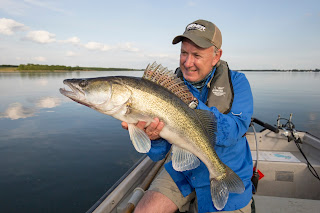 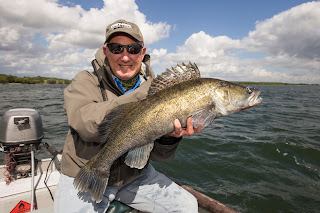 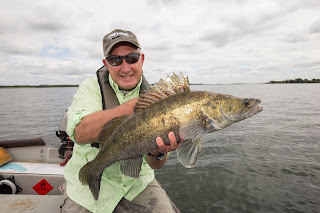 About an hour later he caught his biggest zed of the season so far, weighing 11lb 12oz! 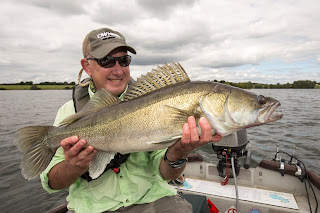 The action came thick and fast - five more Zander followed throughout the rest of the afternoon for Dad, whilst I also managed to catch five up to 9lb 8oz. 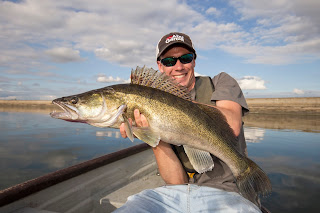 Whilst Dad was playing one of his fish, we watched another four or five fish follow the Zander he'd hooked on the sonar. 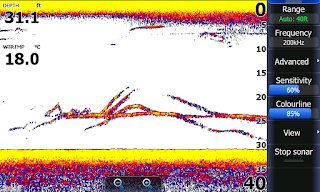 Then, at the end of the day, just before the boats had to go back in, Dad caught two Zander on his last two casts - and both were over 10lb! 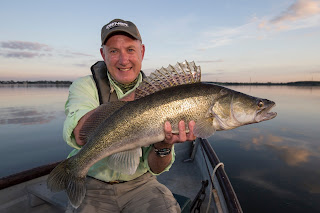 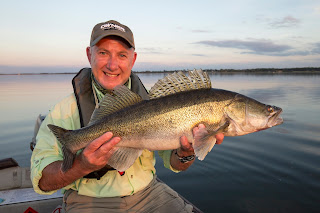 One thing that Grafham always guarantees on a cloudless day is an amazing sunset, something I’ve been lucky enough to see many times. This photo was one that Dad took as we were driving home - we decided to pull over and take some pictures from the dam. 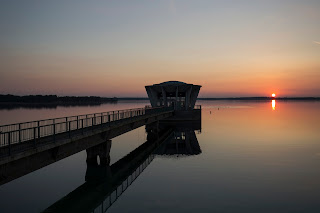 We’d had some brilliant fishing over the course of that month, but it was now time to turn our attention to June 16th - the opening day of the river season, which I’ll talk about on my next blog post!
Posted by Sam Edmonds Fishing Blog at 10:18 2 comments: