Perch in the Snow 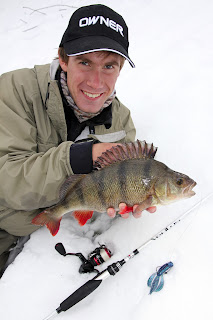 Catching Perch any time of the year is great, but in the snow it's extra special - no matter what the size. Their stripes and red fins look stunning against a white, snowy background.

Just two days after returning from our holiday in Tobago, before I could get back on the rivers fishing for Perch, I flew out to France to join the Shuttleworth College lads who were netting Lac de Villedon, situated near Limoges. I was lucky to get out there actually, as the Shuttleworth boys had flown out the same morning as I'd arrived back at Gatwick, but with the help of our tutors Chris Vaughan and Steve Waters, I managed to fly out two days later.

In the week we were there, with the help of our great hosts Paul, John and 'Dams', we completed many jobs around the site, including netting, felling trees, building embankments around swims to protect them from bank erosion, smashing down and rebuilding pegs, litter picking and clearing debris from the sluice gate at the top of the lake. The netting produced thousands of fish including Carp to 31kg, Catfish to well over 100lbs and a rack of other species including Roach, Perch, Pike, Pumpkinseed, Zander, Tench and even a Sturgeon.

Now back to the Perch! Whilst I was away at Villedon my Dad borrowed my Abu Veritas rod and fished an afternoon session on our local river. He was really impressed with the rod and the Revo SX reel, and managed to catch 3 Perch to 3lb, plus a jack Pike. 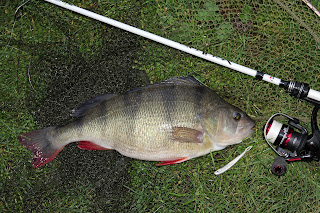 Not long after returning from France we had a good dumping of white stuff, so I was really looking forward to trying to catch some Perch in the snow. Fishing 4 short sessions we managed to catch a few nice stripeys, as well as some Pike, either jigging or on the Texas rig. 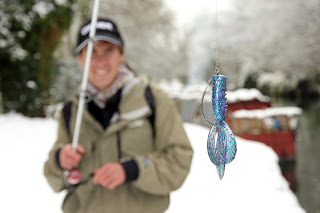 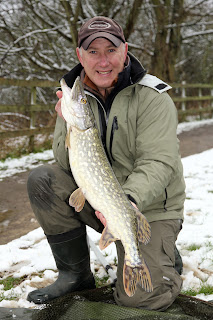 After a few days the snow melted rapidly and overnight, many rivers around our way (and I guess everywhere else) were bombing through and the colour of chocolate. So the rivers were well out of the question, so we decided to try a couple of gravel pits for Pike, using my new Veritas baitcasting set-up and some of the Sébile lures, including the Magic Swimmer Soft. Between us we landed 7 Pike up to double figures. 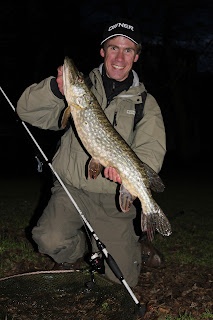 The Magic Swimmer worked really well - it was great for fishing in snaggy or weedy areas. We found that just giving it a split second before setting the hook resulted in better hookups, as the hook is hidden inside the bait. 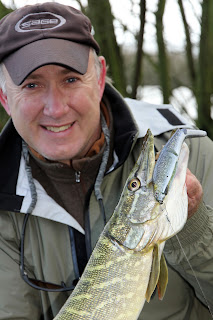 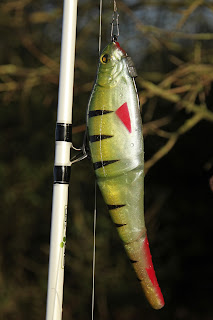 We kept an eye on the rivers and about 6 days later, they were looking spot on for some more lure fishing for Perch. So a trip back on the Lea was planned!

My Dad started the day by catching a nice Brownie on a shad. He then went on to catch 3 more Perch before I'd even had a bite! I was beginning to wonder what I was doing wrong!! We decided that for the afternoon, we'd try a different stretch of river and a spot where my Dad had lost a big Perch on a previous trip, which he reckoned could have been a 4lb'er, a couple of months back. We'd been back numerous times trying to catch it again with no success, and wondered whether it was still in the same area. Unfortunately, Perch are not in every swim, especially big stripeys, and I'd love to know how many miles of bank side my Dad and I have covered searching for Perch. But it's very addictive and great fun exploring!

My Dad quickly caught another nice 2lb'er and I was getting a bit concerned! But moments later I had a good whack and hooked in to a fish. I couldn't believe it when I got it in the net - it looked a whopper! We're pretty sure it's the same fish as my Dad lost, and he was right - it weighed fractionally over 4lbs, at 4lb 1/2oz. It had been well worth the wait (I told him afterwards I was only after specimens!!). 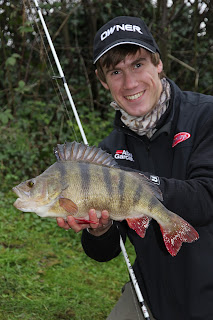 That day we ended up with 10 Perch, 1 Pike and a Brownie. My Dad also lost another good Perch at the net which was getting on for 3 and a half pounds.

We've had a couple of outings since that day but the fishing has been quite tough, catching only a handful of Perch and a few Pike, but two of those were crackers that my Dad caught, weighing 3lb 8oz and 2lb 15oz. 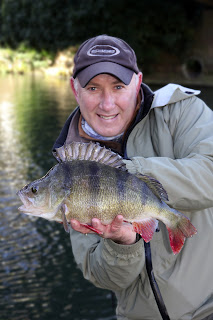 Before I end this post, I'd just like to say a big thank you to Adam Entwistle. A few months ago he asked whether he could use a couple of photographs of Perch I'd caught for reference for some line drawings. I couldn't believe it when I received the print in the post! The Perch have been brilliantly illustrated in pencil - one drawing showing the whole Perch and the other, a head shot, with an Ondex spinner hanging from it's mouth. It's now hanging on the wall at home! Thank you Adam! 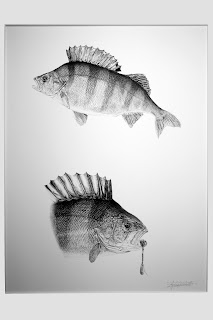 With only a month to go before the end of the season, time is running out - I think my Dad is looking forward to the closed season just so he can give his legs a rest from all the walking!
Posted by Sam Edmonds Fishing Blog at 08:40 2 comments: