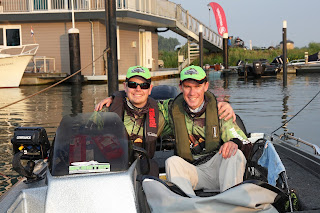 Last year, Dan Brackley, a good friend of mine, was looking for a boat partner to join him to make a pair to fish the Predator Tour 2016. The Predator Tour is Europe's biggest open boat lure fishing competition, and this year's event was the biggest to date with 98 pairs taking on Hollands Diep, an estuary of the River Rhine. 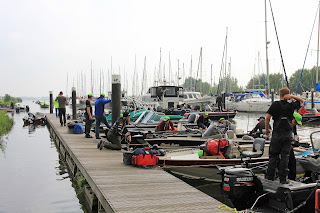 The event sounded amazing and I contacted Dan to see if he'd be interested in having me as his boat partner, and he very kindly allowed me to form a team with him for the tournament.

The Predator Tour is a three day competition, starting on the Friday and finishing on the Sunday afternoon, so to give ourselves time to practice, we headed out on the Saturday night (six days before the first match day) on the Harwich-Hook of Holland ferry. I'm not sure how Dan went about booking the ferry, but somehow we ended up in the luxurious Captains Suite, right at the front of the ferry, with free champagne and beer, which was a great start to the trip!

We managed to fit a couple of hours fishing in on the Sunday afternoon through some heavy rain, which enabled Dan and my Dad to catch their first Zander of the trip. 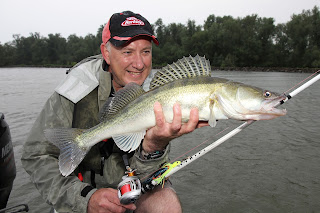 Unfortunately, we couldn't fish on the Monday due to thunderstorms, but it did give us some time to prepare for the forthcoming match.

Tuesday gave us our first full day to really explore the vastness of Hollands Diep, which is over two miles wide in places! I can't compare the fishing there to anywhere I've fished for Pike, Perch and Zander in the UK - dodging huge container ships as we drove down shipping lanes to reach spots, fishing for Perch and Zander in 2ft of water with 6" lures, whilst being surrounded by huge Mullet tailing around the boat! 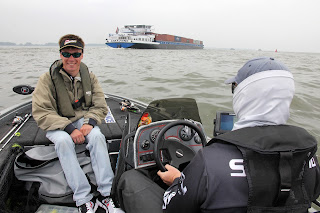 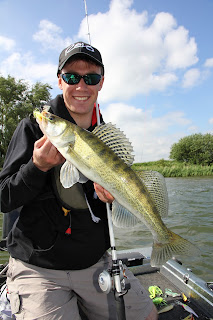 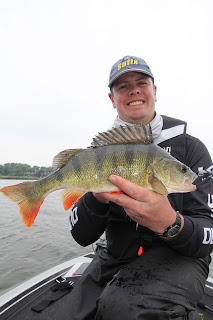 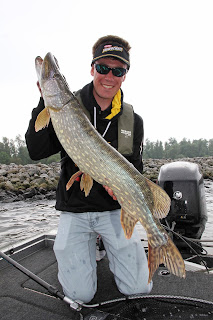 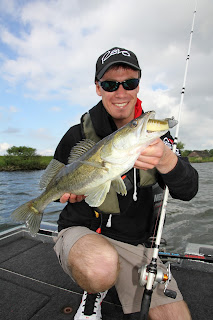 We had some great fishing and over two and a half practice days, we caught Pike to 98cm on the Berkley Powerbait Kicker Frog, Perch to 44cm and Zander to around 70cm. 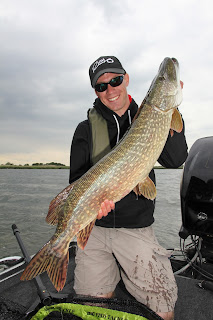 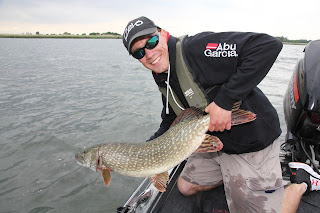 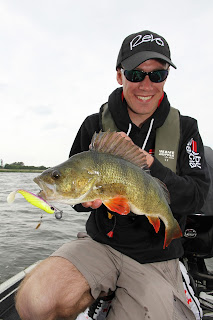 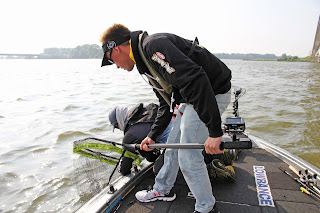 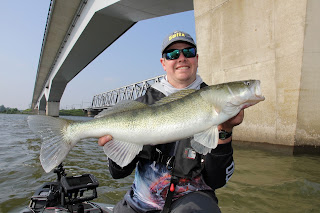 More importantly, we'd found areas to fish during the match, and had an idea of tactics and lures to use - so we put together a game plan for day one. 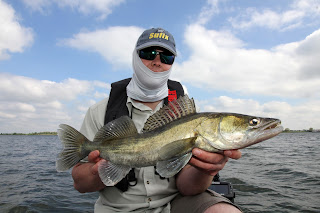 The way the Predator Tour works is that you have to catch three Pike to qualify, then three Zander and one Perch to complete the limit, then the longest combined length wins. Dan and I planned to fish for Pike first so we could try and get these ticked off (being the most important of the species to catch), and thankfully, our game plan worked. 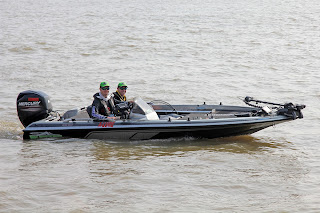 The atmosphere at the start of the Predator Tour was very special, especially on day one, when we had a helicopter filming just a few metres above our heads! 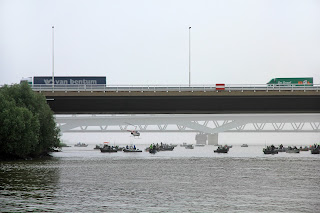 The marshals signalled the start of the match and the roar of 98 boats zooming off in to Hollands Diep was a moment I won't forget! 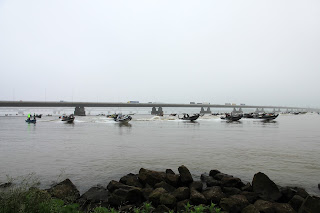 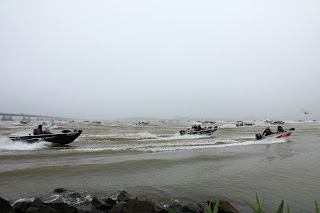 Our first fish of the match was actually our biggest Perch of the tournament - a 46cm stripey caught by Dan, but this was followed by all-important Pike of 85cm, 47cm and 51cm, plus another which was too small to count. 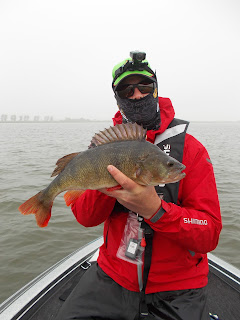 During this time I also caught two 44cm Perch and one of 45cm on 4" Berkley Ripple Shads in Cappuccino, which were fantastic fish but didn't count as Dan had already caught the biggest Perch! 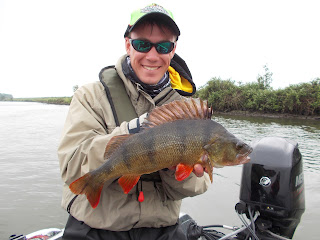 Dan also managed a 48cm Zander in the last half hour of day one, and by the end of the day we were 15th out of 98 pairs, needing two measurable Zander to complete our limit, then we needed to improve on the length of fish we'd caught. 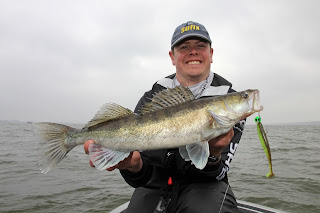 Day two started two and a half hours late due to a fog delay. At 10.30am we headed out in to Hollands Diep in still relatively thick fog, which had a very eery feel to it as huge ships emerged through the mist as we were driving to our first spot, although the fog burnt off quickly soon after we started fishing. 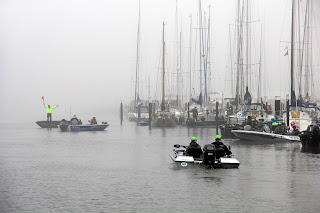 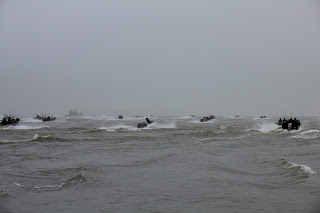 We had quite a slow start but our first fish was a 68cm Zander. 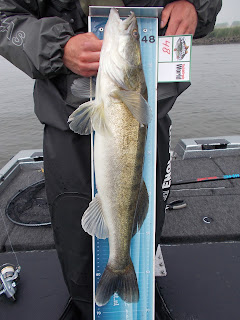 On the next cast, I hooked and landed a Pike of 101cm! Unfortunately, it wasn't the nicest looking Pike I've ever caught, with a large area on both sides near the tail showing just muscle. It had probably been hit by the propeller of a boat. 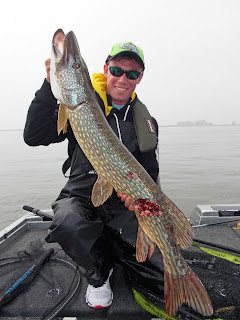 With no more Zander showing, we headed in to deeper water to try and catch our last required fish, and here I caught two Zander - the first fish was undersized, but thankfully on the next cast I caught a 44cm fish to complete the three species total required to finish higher in the table. We climbed to 12th out 98 teams after day two, but there was room for improvement on one of the Pike and two of the Zander, and we knew that if we couldn't improve on the lengths of these fish, then we would probably slip down the table, but we headed in to day three confident of increasing our overall length.

Whilst Dan and I were out fishing, Dad had a few hours on the Saturday fishing from the shore and caught this 61cm Zander - that would have come in handy for me and Dan during the match! 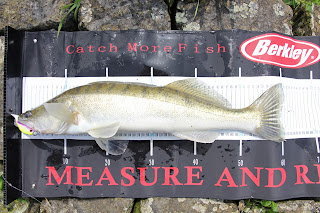 By day three, heavy rain across Europe, which had caused flooding in France, Germany and Romania, had caused the Rhine to colour up massively and we had very little visibility, with just 3" in some areas. Unfortunately, we lost a fish and had one other bite, and they were the only two bites we had all day. Failing to increase our overall length caused us to slip from 12th to 23rd, which was a real gutter for us. However, we were up against some of Europe's best lure anglers, many of who know Hollands Diep very well and have fished the venue for years, so we were pleased in one sense, but upset in another!

The prizes were awarded to the winners at the closing ceremony at the restaurant at Euro Parcs Biesbosch, where all the competitors were staying. 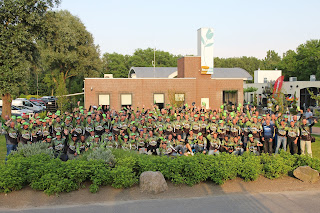 The accommodation and restaurant were excellent and we had a great time there, especially chatting to fellow competitors. It was also great to see Evaldas Skablauskas and Vidar Thomassen, also from England, competing in the match. 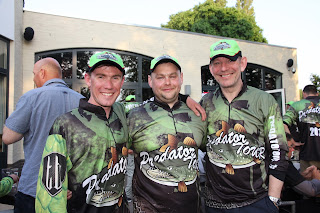 Congratulations to Luc Coppens and Jeremy Staverman for retaining the Predator Tour title - they have a fantastic record of tournament wins in Holland, also winning the last two World Predator Classics. 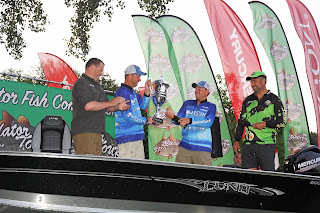 It was a brilliant tournament, which was very well organised by Evert Oostdam and his colleagues, and I've certainly learnt a lot from my first time fishing in Holland. Thanks Dan for letting me join you!