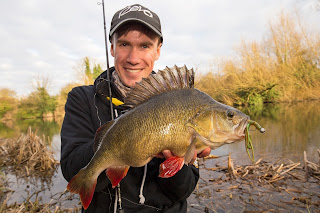 After returning from Sri Lanka, our plan was to have a few trips along some of our local rivers, to get back in to the swing of fishing in the UK, before heading to rivers further afield trying to track down some big Perch. Unfortunately, we didn’t get off to a good start as two days after returning from Sri Lanka, my Dad came down with Dengue Fever. It was a nasty bug and kept him out of action for a while, but thankfully he’s OK now. Thank goodness he didn’t come down with it when we were on holiday!

When he recovered and we managed to get back out fishing, we decided to take it easy and not travel too far, whilst Dad recovered to 100%. We were quite lucky in that we hit on to some good fishing almost immediately, and caught some nice Perch on Pit Boss Jr’s, Rocket Craws and Ripple Shads. 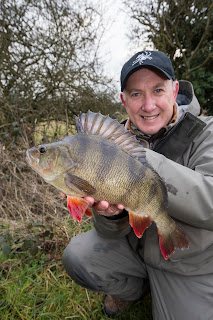 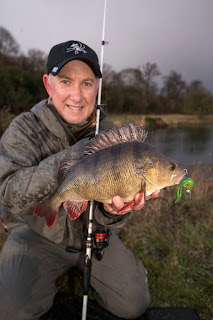 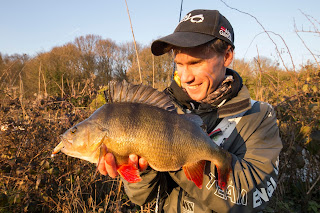 After each fishing trip, I take down notes on what we caught, what lures/flies worked on the day, weather etc., and on the evening I caught the 3lb 4oz Perch, as I was writing down some notes from the afternoon’s fishing we’d just had, I decided to count up how many Perch over 3lb I’d caught on lures and flies. Once I’d figured out that I’d caught 99 Perch over 3lb, my target for the remaining five weeks of the season was clear - to catch one more Perch over the 3lb mark! 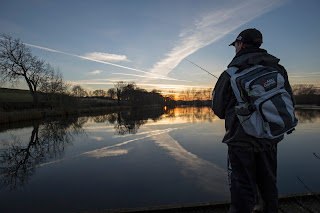 We started fishing short afternoons on a few of our local rivers, but, unfortunately, the fishing got much harder, so to locate the fish, we had to walk many miles, covering as much water as possible. We did catch the odd nice stripey, with my biggest weighing 2lb 11oz, but my Dad did catch a 3lb 2oz - why couldn’t I have caught that instead?! 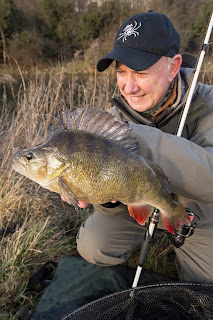 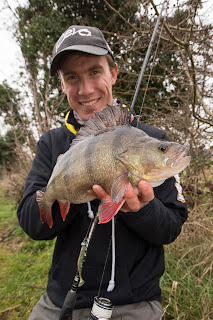 We then had quite a lot of rain, which coloured up the rivers to a point where there were just a couple of inches of visibility, so we decided to try a couple of gravel pits. After a couple of trips I’d caught quite a few Pike, but not my intended quarry. 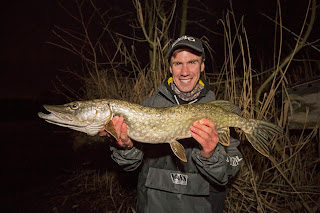 A few more days passed and the rivers had started to fine down to a very nice colour, so it was time to fish the rivers again. There was one particular stretch we had in mind that we hadn’t fished for around 3 months, but my Dad and I were keen to give it a go.

We started around 1pm and after two hours of fishing and a mile of bank covered, neither of us had managed a bite. Moving in to the next swim, there was an overhanging bush on the far side of the river that looked particularly interesting and I made a good cast right under it. I began to hop my Texas rigged Rocket Craw along the bottom, when I felt a very quick ‘nip’, which I was sure was a bite, but it wasn’t enough of a take to set the hook. I was hoping it would come back for another go and after 3-4 more jigs I had a much better take, which I hooked. I could tell almost straight away it was a Perch, characterised by the heavy head shaking, and as it broke the surface I knew this was the fish I’d been after, so I’d better not lose it! Thankfully a few seconds later it slipped over the rim of the net, and it was a lot bigger than I’d initially thought! My Dad and I both knew it was well over 3lbs, but by just how much?

The fish went on the scales and weighed 4lb 2oz (47cm) - I would have been pleased with a scraper 3lb’er, but I was over the moon with a 4lb 2oz! 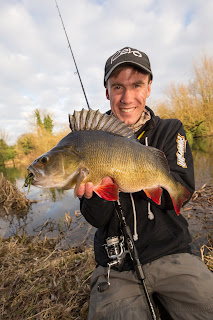 During the final few of weeks of the season, most of my trips were short early morning or evening sessions. The first couple of weeks after I caught the 4lb 2oz, everywhere we fished seemed to have switched off (apart from a few Pike and the odd Trout - Dad caught a nice fish whilst targeting Chub, and I caught one an hour after dark drop-shotting!). 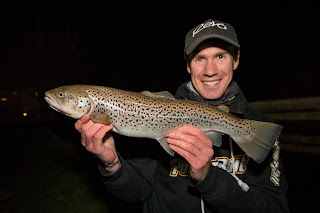 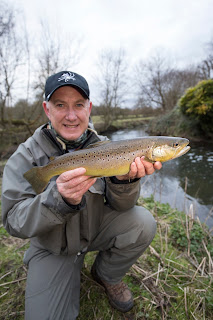 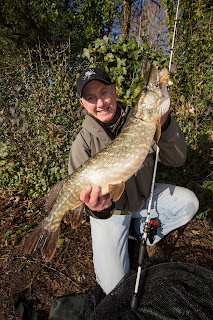 The harder the fishing became, the further we had to walk so that we could find fish. Although we didn't catch many Perch during the quiet period, the fish we did catch were of a good size. The Sick Fish Jr, rigged on a 5g jighead, caught most of these fish. 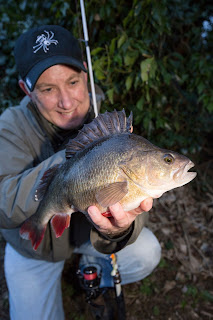 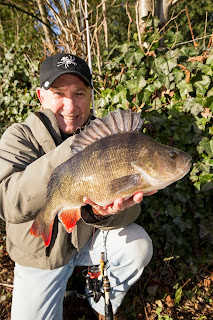 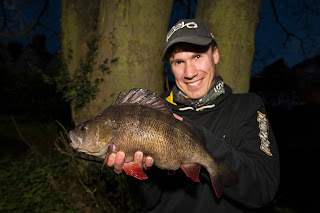 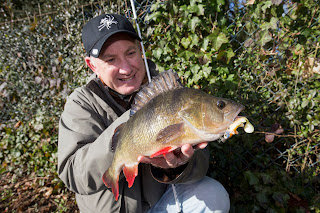 We also had a trip to a gravel pit we hadn't fished before, and I was lucky enough to catch this old warrior just before it got dark, along with a jack Pike. 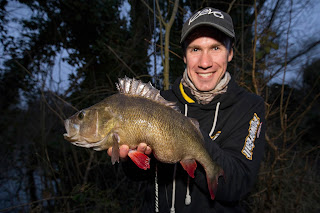 Our plan for the last week of the season was to make the most of the spare time I had early in the mornings or late afternoon/evenings. On one late evening trip, after a biteless couple of hours leading up to dark, we were just about to call it a day and head home when something slammed Dad’s white Rocket Craw, in pitch black conditions. It turned out to be a 3lb 6oz (42cm) Perch - not the best looking stripey he’s caught, but it proved that fish were still feeding after it got dark. After taking a few pictures, it was time to head home for dinner, but we planned to return on our next opportunity. 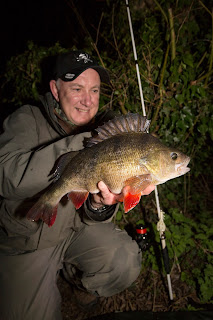 We returned a couple of days later on a warm bright and sunny afternoon, which really made it feel like Spring! Whilst walking to the area we wanted to start fishing, we spotted several Carp in the margins. We both quickly changed to tiny creature baits and tried to stalk them, and I came very close to hooking one when a fish sucked my creature bait off the bottom, but when I struck the hook didn’t set! Whilst this was happening Dad spotted another fish sitting on the bottom. It was hard to make out exactly what species it was, but he couldn’t resist casting his creature bait close to it. One cast was all that was needed and he hooked in to what he first thought was small Carp - then he noticed it had stripes! It turned out to be a cracking Perch of 3lb 13oz (45cm). 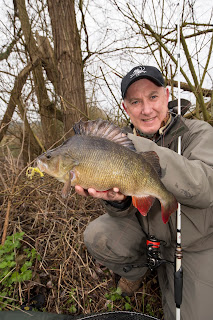 A few minutes after releasing the Perch, I hooked and landed a jack Pike, that was followed in by a Perch that was longer than the Pike! I called Dad over to have a go for it, but by the time he’d run up the bank with his rod, the fish had swum away. The Pike was only tiny but out of curiosity, I measured it, and it turned out to be 44cm, so it was obvious that the Perch that followed me in must have been a good fish!

Later that evening, just before it got dark, we returned to the area where the Perch had followed me in, and I hooked and landed a very long Perch, measuring 46cm. Despite being 1cm longer than Dad’s 3lb 13oz, it was actually 10oz lighter, weighing 3lb 3oz, which goes to show that you can’t guess the weight of the fish just on a measurement. 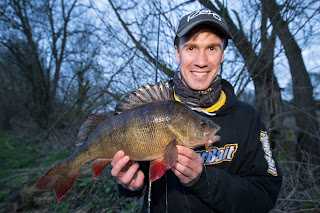 The next day was March 14th, the last day of the river season. We decided to target Chub on lures first, as we knew it would be our last opportunity to target these until June 16th, before trying for Perch again as it got dark. Over the past month we’d fished some very Chubby looking sections of river, where we know there are big Chub, and we’d both been surprised that we hadn’t caught one, even whilst targeting Perch on lures, but for the last day we decided to visit a stretch we hadn’t fished since the summer, but we knew there can sometimes can be the odd big Chub.

To start with, we made a few casts to an overhanging bush, with just a follow from a tiny jack. After I’d felt like I’d covered the bush, I decided to move upstream to cover another overhanging tree. My first two casts weren’t particularly accurate but on my third cast, the lure landed exactly where I wanted it to, right tight to the roots - when the lure landed in the water I actually said to myself ‘that’s the one!’. I hopped my creature bait about six inches off the bottom, hopped it again and then had one hell of a take and struck in to a big Chub! It immediately tried to get into the roots, but luckily I managed to turn its head and guide it in to mid river, before Dad came to the rescue and netted it for me, as I was in an awkward, tight swim. At 6lb 3oz and 58cm in length, it was a new P.B! 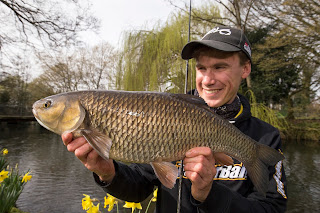 After a couple more hours targeting Chub, and catching a few jacks, we thought we’d try and end the season with a 3lb Perch. We only had two bites between us that evening - one tiny Perch that dropped off as I was lifting it in, and then Dad hooked a very short but plump fish. It wasn’t quite a 3lb’er, but at 2lb 11oz, Dad had caught a nice Perch and I’d caught a P.B Chub to sign off a very enjoyable season! 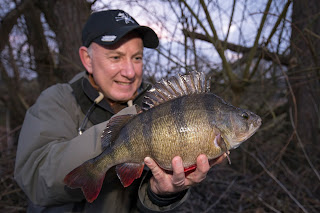 Aside from my own fishing, throughout February and earlier this month I’ve been running some lure fishing sessions for the Angling Trust and Get Hooked on Fishing at Rib Valley and Walthamstow. February isn’t the easiest month to catch fish, but hopefully the participants have learned something new from the sessions. I know some of the guys have been out fishing since and caught some lovely fish, so well done to them!

As the end of March nears, the coaching looks set to take off as the weather warms up - bring on the Spring! 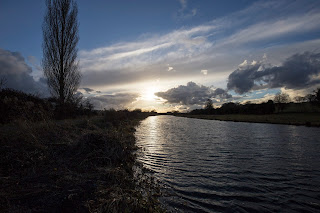