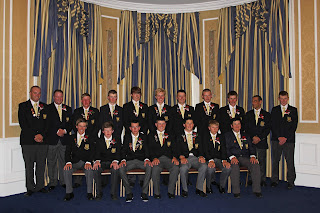 Over the last few months, the England Youth Flyfishing Team have been training for the Youth International Flyfishing Championships. This year it was to be hosted by Ireland on Lough Owel. We were unsure of what we'd be up against as the match was being held on a water quite different to reservoirs stocked with triploid rainbows, which is what most of us are used to here in England. In Ireland we would be targeting small browns, with a mix of wild and stocked fish - but we were still all looking forward to a different challenge.

On the 29th July my Mum, Dad and I left home to meet with most of the England Team at Holyhead Port, before sailing to Dublin. Once landing in Ireland we then drove an hour and a quarter to the Bloomfield House Hotel, situated on the banks of Lough Ennell, where all teams would be staying for the week. On the evening of arrival, all the anglers were welcomed and briefed about the forthcoming 3 days at a dinner. Later that evening, England had our first of many team talks, discussing the areas that each England boat would practice the next day, as well as tactics to try.

That same evening Paul Gillies drove our team, in the minibus, to Lough Owel so we could have our first look at the lake. It was enormous - we couldn't even see the other end from where we were standing! 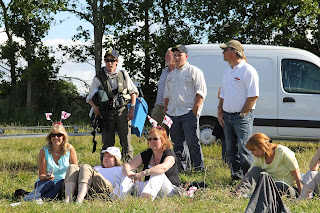 The next morning we returned to the 3000 acre lough ready for the first practice of two. My boat partner was Fen Oakley, who set up with a team of dabblers on a slow glass line, whilst I opted to fish deeper on a Wet Cel II line fishing small nymphs, seeing as it was quite bright. We were told to cover the area between the Pumphouse Reeds round to the Ash Ditch. 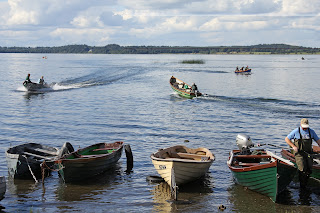 On our first drift I bumped off two fish right outside the pumphouse. It was then to be another 4 hours before we had any more interest. The lough was flat calm and the skies were almost cloudless, and we could see the bottom of, what must have been, 25ft of water. I asked our boatman to move us further out until we couldn't see the bottom anymore, and first cast I caught my first Lough Owel brownie. Spooning the fish after I killed it proved interesting as we found it stuffed full of Sticklebacks. I also landed another two before heading in for dinner and a team discussion. Talking between us, some had done well and some hadn't, but it was all about gathering as much information as possible.

The second practice day saw a complete change in the weather. A strong southerly wind and heavy rain had moved in, which were better conditions for fishing. Fishing with Dom Sheratte in the morning, we found a small shoal of fish around Lady's Island - Dom had 2 and I had 1.

We came in at lunchtime and after another team talk I headed out with Gary Owen for the afternoon to the small pump house and Brabazon's. Here, I caught another 5 fish, using a midge tip with an Irish stimulator on the top dropper, a diawl bach in the middle and a double olive on the point. 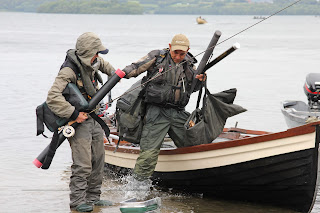 By the evening our team felt that we'd figured out where most of the fish were, and it was now a case of fine-tuning what tactics we'd use on match day. Carl Malpass, one of our team coaches, had done well catching 9 fish, all on dabblers. Others, like myself, were getting plenty of interest to red-arsed Irish Stimulators or Green Peters. After a comprehensive team talk, we were all happy with what areas and methods to use on the day of the match. 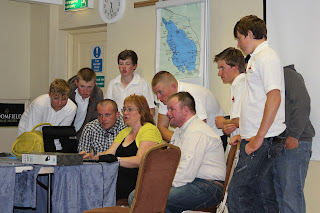 At the boat draw following dinner, I was paired with new Irish cap Colin O'Reilley, and our boatman was Carl Owens, who fished last year for Ireland at the International on Menteith. Some of the team tied a few flies before going to bed, but it was the committee and the coaches who stayed up most of the night tying essential patterns for the crucial day. Thank you to all of them! 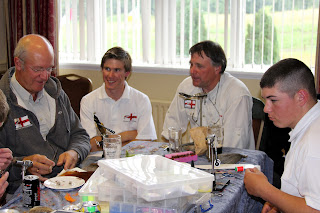 After a hearty breakfast, the teams made the 20 minute drive from the hotel to the fishing lodge at Owel - match day had arrived. It was incredibly windy, with gusts well over 25mph - if this match was held on Rutland or Grafham, there was no way the boats would have been allowed out! Most of us set up with slow or fast glass lines. I opted for the slow glass, using an Irish Stimulator, (that we nicknamed the BBD) and Dabblers to start with. 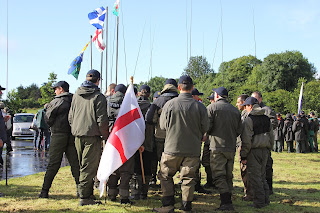 Before the match started, all the teams paraded behind two bagpipers, marching down to the lake from the fishing lodge. It was an amazing experience, with all the parents and spectators cheering us on and waving flags. 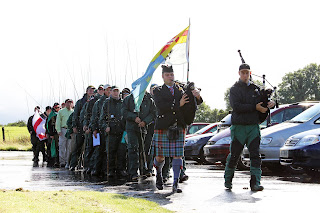 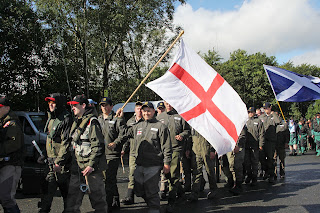 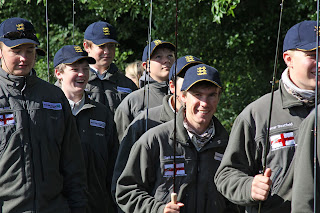 Very soon after that, the horn was blown and the match began! 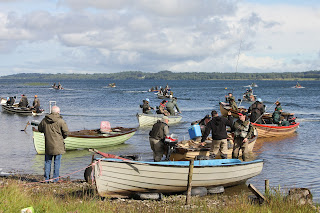 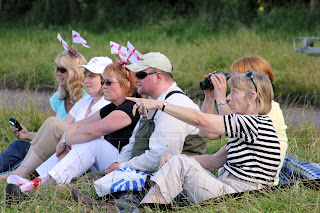 As I had first priority on the motor, I asked our boatman to head to the small pump house, where I'd caught the day before. When we got there though, the waves were dangerously high, and the heavens opened with torrential rain. After half an hour I had my first fish to the boat. Unfortunately, there was a size limit and this was only a fingerling, so it couldn't be counted!

It took about 3 hours before we found some fish, which I cast to and after 2 strips landed my first and biggest fish of the day, a brownie of 1lb 11oz, which had taken a claret dabbler. We covered the pod again and I landed another in quick succession.

Unfortunately, it was then my boat partner's turn on the motor and he wanted to move to the other side of the lake where it was calmer. Here, I landed another fish around the 1lb 8oz mark. Colin also caught a fish there too.

We didn't have any more and before we knew it it was nearly 5pm - time to go back in. Arriving back at the dock and talking to some of my team-mates, it sounded like we'd done well as no-one had blanked in our team. We also heard a couple of boats from the other teams had come in early as they didn't like the rough conditions. A nervous and tense weigh in followed... 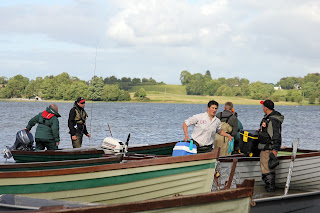 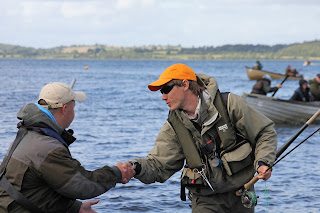 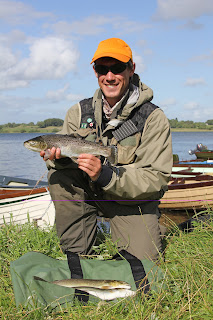 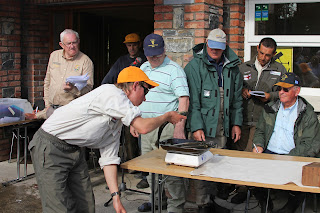 Afterwards, it was clarified that England had won for only the second time EVER in Ireland, the last time being in 1996, which was also at Lough Owel. We'd also won by the biggest margin ever in an International in Ireland, with a combined total of 38 fish, followed by Ireland's 28, Scotland's 24, and Wales' 12.  When we heard the news, we all agreed to celebrate by jumping in the Lough!! 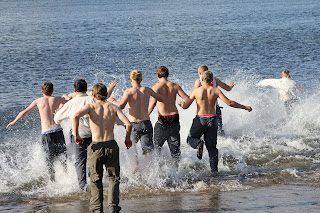 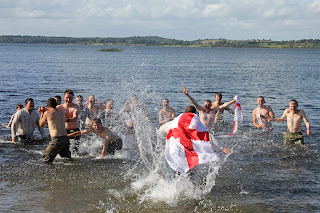 It was then back to the hotel for a quick shower and change in to our England suits before our second parade of the day, again behind the bagpiper, to the presentation room for the Gala dinner. Everyone was presented with their medals and trophies, including James Atkinson with the biggest overall bag of 7 fish and Adam Worker with the biggest English fish. England then received the Bob Church International Trophy. It was a moment we all will never forget. 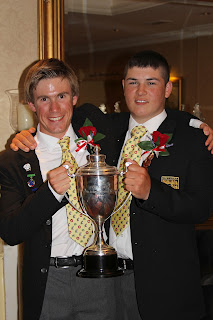 Our team captain, Kieran Bonas, collected the trophy and did a great speech thanking everyone. A bottle of champagne was popped open which soon disappeared!!

After Phil Longstaff, our manager, said thank you to everyone, he'd agreed before the match that if England won, we could shave his head! We asked him if we could, and he said "let's get this over and done with!!" The whole team dived on top of him and put an apple in his mouth while Gary Owen, one of his best mates, shaved lines through his hair!

Then he said "Now this is where the match really begins!" He wanted a Cheesy Puff Competition between himself, Gary Owen and Dom Sheratte, our vice captain! 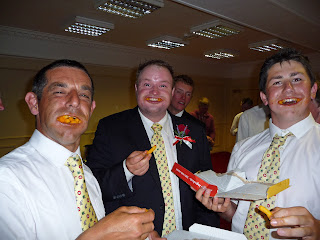 One of the best parts of the evening was the four teams getting together and having a good laugh. The banter continued well in to the early hours of the morning - we were in stitches all night. 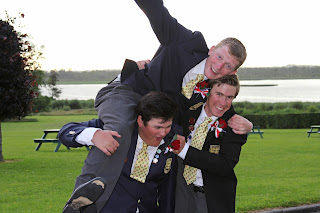 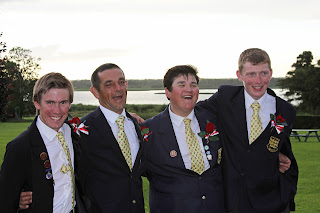 At breakfast the following morning, everyone was a bit hung over, but the biggest shock was when Phil turned up - with no hair, as Gary had shaved the rest of it off!

After everyone said their farewells and left for home, the hotel seemed really quiet. Mum, Dad and I had decided to stay on for a couple more days just to chill out and have a day fishing somewhere. In the end we decided to have a trip to Galway, which has a beautiful coastline. We fished for a few hours in a small harbour near Keeraunnagark, flyfishing and lure fishing. Dad caught 3 species on the fly - Corkwing Wrasse, Pollack, and even a Blenny, while I caught the same, including a Mackerel, on lures. 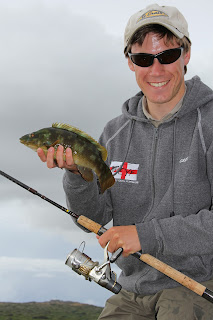 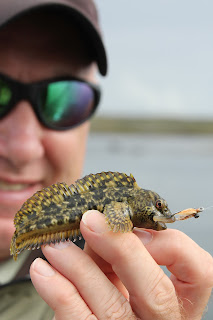 That was the last time we fished in Ireland. It had been my first ever visit to the Emerald Isle, and the experience had been fantastic. The Irish were very friendly and the countryside was beautiful.  I'm really looking forward to going back there one day as there's so much fishing to do out there. I'd like to end by saying thank you to everyone that helped out with the team, including the Committee and all of the parents, plus a massive well done to Phil Longstaff and his coaching team of Gary Owen, Carl Malpass and Ryan Worker. I am proud to have been part of such a great team, and I wish them all the best of luck for next year, as I'm too old for the team now!