The Highs and Lows of Fishing 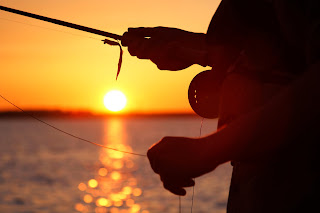 Over the past 4 or 5 weeks I’ve had some great fishing (apart from one terrible day - but I’ll come to that later). Most of it has been practising for two matches - the Youth National (which I fished on Monday), and the Youth International which will be on the Lake of Menteith in Scotland on July 27th. Practice days on Ravensthorpe, Pitsford and Grafham have been brilliant, catching plenty of fish, and averaging about 9 on each trip. What’s made it even more fun is that I’ve been catching on a variety of methods - straight line nymphing, fishing under the bung, pulling and fishing the washing line on a slow glass. Some of the bites have been awesome and the trout have fought like crazy until I’ve had them safely in the net. The weather though has made fishing from a boat quite challenging, due to strong winds - all good practice though. I think I’ve only fished one day in the past few weeks where it hasn’t been blowing a bit. 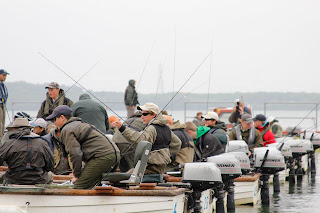 Now, to my terrible day. I’ll get it over and done with first so I can save the best for last! For a good while now I’ve been really looking forward to fishing the Youth National Qualifier, a match which I won last year. Practising on Grafham had all gone really well right up to match day. Two days previously I'd caught ten on a variety of methods from a number of different areas, so I was quite confident - what with Grafham being one of my favourite places to fish too, I felt like I had a good chance of doing well. To cut a long story short, I returned to the harbour with just one fish. To say I was gutted was the understatement of the year. I’d fished as hard as I could right to the very last minute, but it didn’t happen for me - why? I don’t know - and why did it have to be on this day of all days? I had no excuses - even if I’d have been fishing 10 rods at the same time I don’t think it would have made any difference. It was just one of those nightmare days all anglers dread. There were some great performances though by others in the team - Ashley Gillies, Kieran Bonas, Adam Worker, Oscar Boatfield and Ryan Matthews (the winner) to name a few, so well done to them - top angling!

About 2 weeks before the national, Pitsford opened to predator fishing with lures. Unfortunately, on that day I had an RE exam to take, so my Dad asked a couple of his best mates if they’d be interested in taking my place. They all go back a long way, about 30 years - when they were on 'Bracken' - one of my Dad's favourite lakes. Over the years they’ve fished a lot together on many different carp venues and from the stories I’ve heard, have had some great fishing and good times doing so. Each of them have a nickname: 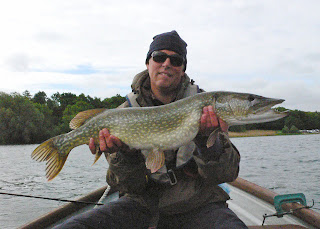 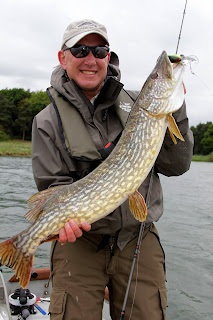 My Dad is known as RS Turbo because of the car he owned at the time when they first met. 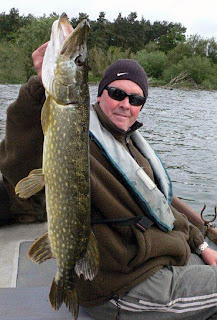 ...and Paul Henson (above), known as ‘The Ultimate’ because that is what he thinks he is! (actually they’re both exceptional anglers, especially at carp fishing). Apparently, I’m ‘The Ultimate 2’ until he hangs up his rods and I can take over his spot - the day I’m really looking forward to! haha!

The report I got when they dropped my Dad back off at our house was that there was more banter than fishing, and Paul had turned it in to a mini match. I wish I’d been there - it sounded like a good laugh. By the end of the day between them, they’d caught 16 pike - nothing big (2 doubles though) - Nick had the biggest at 11lb 6oz, but they hooked and lost a lot, apart from Paul who boasted as he landed every one of his fish! But, I was told to add by my Dad, that he just ‘edged it’ by catching 6 to Nick and Paul’s 5 each. Actually, considering Nick and Paul hardly ever go lure fishing, they’d done really well. My Dad had to make what he called a ‘major comeback’ to win, as he caught most of his fish later in the day. Paul reckons that he wasn't really trying! 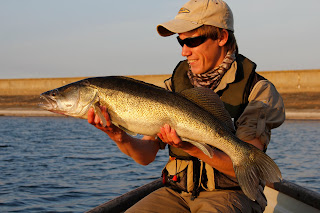 Two days after the National, it was my turn to target the predators - but at Grafham instead, where flyfishing for them is only allowed at the moment. Due to trout fishing, it’s something I’ve done a little less of this year. It turned out to be a good way of getting over the blues of Monday’s match. Still tired from the weekend, we took an afternoon boat instead of a full day out. The weather looked perfect for what we had in mind. We spent about 3 hours targeting Pike in some of the bays with only one take, which Dad missed. We then decided to move to other areas in search of some Zander. It was already 4pm but after 5 minutes in the right place, we picked up a fish each, plus one more about 10 minutes later. Once this switched off, we moved onto a few more of our hotspots, where I picked up another four and Dad had two more, including a cracker of 10lb 3oz. After trying some different areas my Dad seemed keen to explore somewhere else. He had an inkling for an area quite close to the shore. I was sceptical at first as I’d only ever caught one zed from this spot before, and it was less than a pound in weight! Within seconds though of lowering the anchor Dad hooked up! He soon had a good Zander in the boat. 20 minutes on, he’d hooked and landed 4 Zeds! I soon hooked one aswell of a similar size - 8lb 3oz. As I played mine, Dad hooked up again! Once I’d unhooked my fish, I cast out again and BANG! It was our second double hookup in 5 minutes! The constant rod bending action continued right to the end until we had to pack up as the boats had to be in. We ended up with 19 Zander from this one spot in two hours. I was also lucky to catch 2 doubles in two casts - one of 11lb 3oz, and then another of 10lb. We’ve had some great days on Grafham but this was truly extraordinary fishing. In total we ended up with 28 Zander in 5 hours, 3 Doubles, and the average size around 7lb. 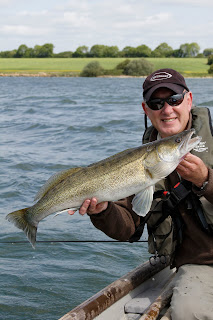 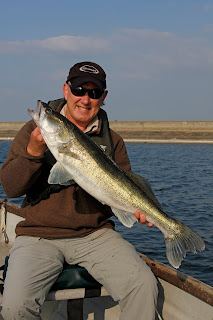 On Sunday 5th June, I was actually meant to be in a match again on Grafham - The Rib Valley Boat Pairs that my Dad and I were fishing together, but it was postponed due to 20mph NE winds. It’s a shame as we were really looking forward to it! On Saturday 4th June though, some of the England Youth team members fished in the Airflo International Midlands heat and came 2nd, securing themselves a place in the final at Rutland. Good going lads! 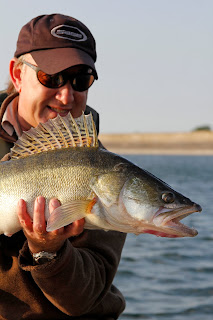 Anyway, I’m not quite sure where I’ll be fishing next but wherever it is I can’t wait!
Posted by Sam Edmonds Fishing Blog at 08:32 1 comment: