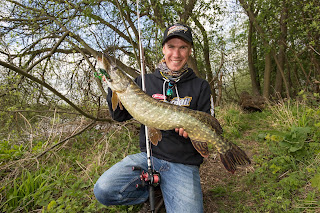 So far this Spring, my fishing has probably been about as mixed as the weather we've had! I've fished for a variety of species, from flyfishing for Carp and Trout, to quivertipping for Roach, to lure fishing for gravel pit Pike and canal Zander. It’s nice to target different species with different tactics rather than stick with one style of fishing, and even when the river season was open, my Dad and I had been talking about targeting some Roach on a local gravel pit. Crystal clear gravel pits are fascinating places to fish - in fact I enjoy walking round gravel pits spotting fish almost as much as I do fishing them! 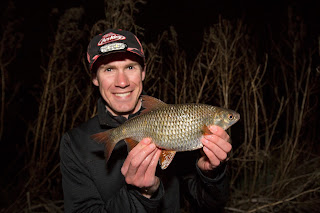 We managed to fit in a few afternoon trips targeting the Roach, and to give ourselves the best chance of catching them, we decided to fish in to the dark. Our best results came on dull, overcast days, or when it got dark, as the lake was crystal clear and the fish felt more confident feeding in low light levels. Our best session came on a very dull, overcast, windy day - in four hours we banked 38, with a few over the 1lb mark, including a bonus 3lb Perch caught on double red maggot! 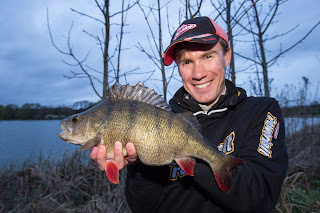 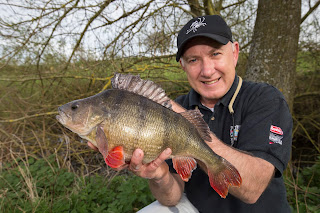 After a few trips targeting the Roach, we were itching to get back to some more active fishing, and now the Pike had finished spawning and had a good rest, it was time to start lure fishing again. Late Spring can be one of the most exciting times to lure fish for Pike, especially in shallow gravel pits - ideal places to target them with frogs and even surface lures. Recently, I was wandering around a gravel pit and watched a Coot chasing away a small Pike, which was eyeing up the Coot’s chicks! 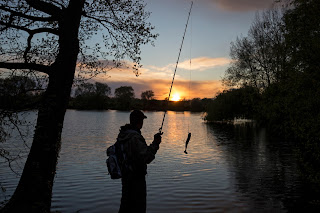 Some of my favourite lures for gravel pit Pike at this time of year are in the picture below - starting from the top is the Sébile Magic Swimmer 125mm slow sinking model, the Berkley Powerbait Kicker Frog, Berkley Powerbait Rib Shad 4.5", Sébile Stick Shad 114mm Suspending and a Chatterbait, rigged with a Berkley Pit Boss trailer. 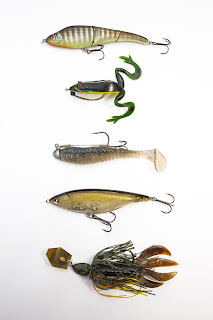 The Powerbait Rib Shad has been one of my favourite shads for Pike since it came out in 2012 and lately it’s been working very well for us - it’s a great size for small and large Pike, and has a wide paddle tail that has an exaggerated swimming action when retrieved. Dad’s caught some very nice fish on these in the last couple of weeks, fished on a straight retrieve in the Blue Shiner Gold and Tennessee Shad colours, both great for fishing in clear water. 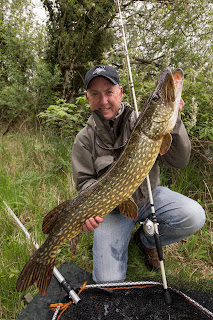 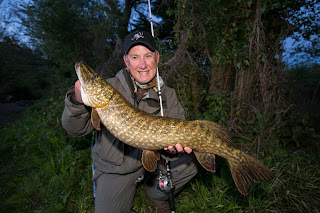 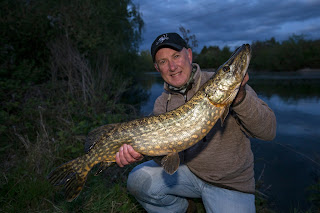 On one particular trip on a very large gravel pit, he landed three doubles, all on the Rib Shad, including this 101cm fish, which may have been a twenty if he’d have caught it a couple of months earlier! 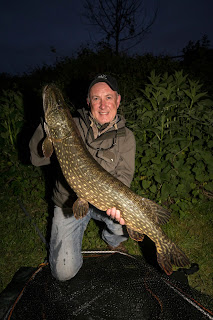 The Kicker Frog was probably my favourite Pike lure last year, and this Spring it has also been working well. The takes can be unbelievable - there was one recent fish that followed the frog out from some bulrushes I’d cast to, and continued to follow it across a shallow bay, bow-waving all the way behind the frog before annihilating it just a couple of metres from the rod tip!

We also enjoy lure fishing canals at this time of year, and a couple of weeks ago we had an afternoon trip on the Grand Union Canal targeting Zander. We were curious to see what the fishing would be like as we’d heard that it had been electro-fished with the purpose of removing the Zander. It’s a shame that this has taken place, as the GUC is a fantastic canal to target Zander. Despite hearing this, we were quite surprised that in the first half hour of fishing, we’d caught two Zander and two nice Perch, which was encouraging, but throughout the rest of the afternoon we covered a good mile or so of bank and we only had two more bites, both of which turned out to be Zander. The Zander fishing had indeed been slow, but what was really strange was the lack of Perch - we’ve caught good numbers in the past whilst targeting the Zander, and we only caught two! Maybe it was just one of those days. 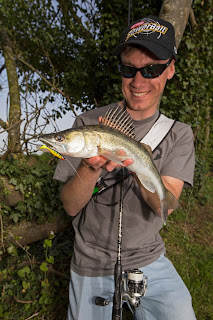 When I got back home, I did some research on the removal of Zander from the GUC and it turns out that over 2000 Zander, totalling around 1.5 tons in weight, were removed from around 20 miles of canal. That’s roughly 100 zeds a mile, with an average size of around 1lb 10oz. Obviously the sizes would have been mixed but Zander reach maturity at around 40cm in length, which is around 1lb 8oz in weight, meaning many future generations of Zander have also been affected by the recent electro-fishing. Hopefully one day, the electro-fishing will stop and Zander will be allowed to find a natural balance in the ecosystem of Britain’s longest canal.

Apart from a short hot spell during the first week of April, this Spring has been noticeably cooler than the last few, and looking back at our fishing notes, we were actually flyfishing for Carp by the end of April last year. Last week we had one relatively warm, sunny day, where for the first time since that hot weekend in April, the Carp were close to the surface at our local Rib Valley Lakes, and Dad and I decided to take advantage. Although it was sunny, the north-easterly wind still made it feel quite chilly, and the Carp weren’t as interested as we were hoping - in fact, we only had a couple of chances, and Dad took his on his very first cast! It turned out to be a 20lb 4oz Common, which he caught on one of his home made mixer flies, made from deer hair. 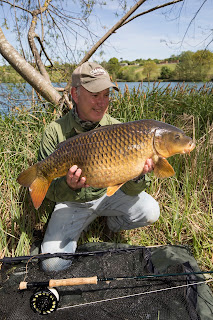 I’ve also managed to fit in a couple of trips flyfishing for Trout, one to Grafham and another on the East Warwick reservoir at Walthamstow after a coaching session for Get Hooked on Fishing. I had a great day with the Pitsford Pirates, fishing with Bart Farmer at Grafham - the buzzer fishing was awesome! Walthamstow isn’t the easiest place to catch Trout, but in the couple of hours we had Dad and I banked five Rainbows, fishing buzzers and damsels under the bung. 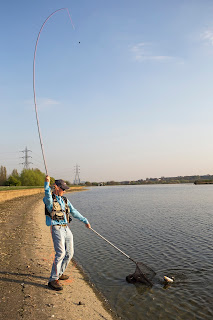 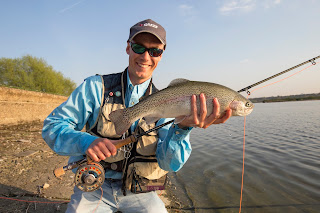 Aside from the fishing, I’ve been doing lots of coaching for Get Hooked on Fishing lately at both Walthamstow and Rib Valley. At the end of March I ran a couple of Get Back in to Lure Angling sessions for the Angling Trust, and had a great group of anglers from Romania come along to one of the sessions. What was interesting was that despite all coming from the same country and getting on as if they’d known each other for years, it was the first time many of them had met, as they were part of a Facebook group for Romanian lure anglers in the UK. 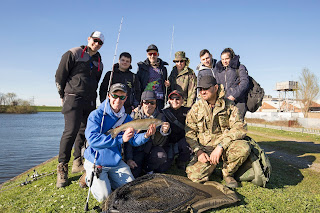 We fished on the High Maynard reservoir but, unfortunately, the fishing was really tough, with just one Trout landed, although after the session Dad did manage to bank a nice Perch from the academy pond on a Shrug Minnow. 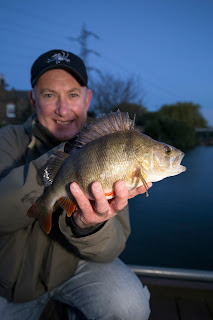 I really hope the weather starts settling down and warming up soon, as I'm looking forward to when the Carp really come up on top and we can flyfish for them. I also can't wait to flyfish for the predators on the midlands reservoirs...