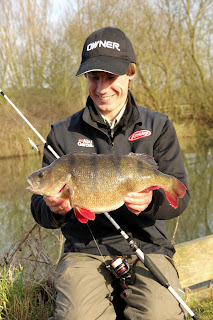 I can't believe that another season has come to a close - once it gets to February the countdown starts, and before you know it, it's all over!

Last year, in the final few weeks we fished a few sessions for Chub and Barbel, but this year I have had so much fun targeting Perch on lures, that's all I've really fished for over the past couple of months! 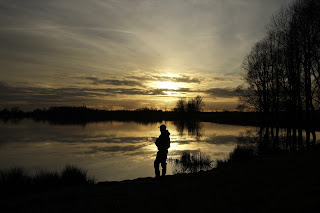 One exception was the opening day at Elinor trout fishery. I'd never fished Elinor on opening day before and my Dad and I had planned to meet up with the Pitsford Pirates for a get-together and BBQ. The recent snowmelt had caused the River Nene, running adjacent to the lake, to flood and when we arrived we could see the lake was still very coloured from floodwater entering - the visibility was only inches! This made for tough fishing - however, I fished two very big, bright lures under the bung as slowly as I could, hoping they would show up enough for the trout to see. I ended the day with 6 fish, including a nice Rainbow of around 5lbs. My Dad lost a real lump just before we were about to pack up, a fish he reckoned was getting on for double figures, and ended the day with 2 fish. It was great to get together with the Pirates, and catch up with some of the England Youth Flyfishing Team. 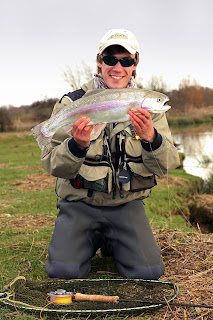 Apart from this, most of the time I've been wandering along the banks of my local rivers and canals, on the search for stripeys. Two days after fishing Elinor, on the first day of my half term, the river levels had dropped and the colour was looking spot on, so we decided to fish for a few hours that afternoon.

On my third cast I hooked in to a good fish of 3lb 7oz that took a 3" shad, and from the same hot spot my Dad also landed two fish on crankbaits, both around the 2lb mark. 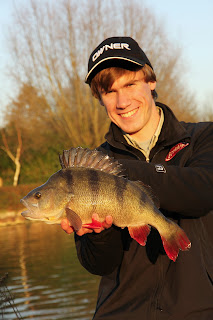 After another half an hour of trying different tactics in the same area without any other bites, we started to leapfrog each other along the bank, covering the water in front of us. We got carried away exploring and ended up covering about a mile and a half of water, but still without a bite. Then completely out of the blue, I had a good whack and hooked in to a heavy headshaking fish, one I knew was definitely a good Perch. But when it came to the net I really did get a shock as it was the biggest Perch I'd ever seen - my Dad and I were both gobsmacked at the size of the fish!! I don't often shake with excitement, but it was a stunning looking creature and we both thought there was a chance it may weigh 5lbs, but at 4lb 12oz it was still a monster, and a new P.B! We were both so blown away it was hard to stop thinking about it for the rest of the session - we carried on fishing but that was the last bite of the afternoon.

The following day we decided to explore another stretch we hadn't fished for a while, and despite it being bright and sunny, it didn't seem to put the fish off and we landed 5 Perch to 3lb 9oz, plus a couple of Pike to just under double figures. The biggest surprise of the day though was when my Dad caught a mint looking Common Carp of 14lb 7oz, hooked clean in the mouth! We have accidentally foul-hooked them before but this fish had taken the lure properly. We're guessing it had mistaken the shad, which was almost white in colour, for a piece of bread, falling on the drop. 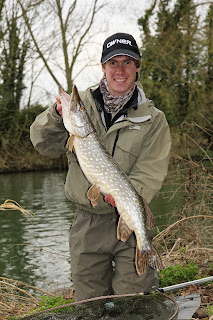 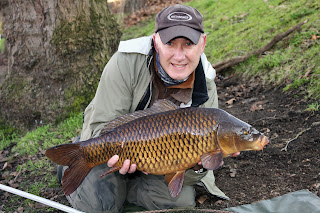 The night after I caught the 4lb 12oz Perch, I came down with a really bad cold. It was really frustrating as it was my half term and I had plenty of time to fish. A couple of days later my Dad also came down with the cold. He seems to get colds or flu a lot worse than I do, and he ended up in bed for the following few days! However the conditions looked so good for fishing, the temptation was too great and despite still feeling really rough, I popped down one afternoon for a few hours fishing before dark, hoping to bump in to another big billy. 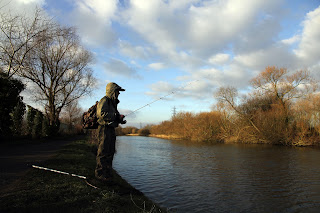 I quickly caught a nice Pike and a small Perch on a Texas rigged shad, before deciding to make a last-minute dash before dark to an area I don't often fish, but I was confident I may get a bite there. On my first cast I hopped a Berkley Pulse Shad from a bush on the far bank, right to my feet before noticing a large stripy figure behind it. When in this situation, what I always do is let the soft bait fall to the bottom, and keep very still - watch the lure and often, the fish will move in over the soft bait and suck it up off the bottom. This has happened many times with both Pike and Perch, and there was one occasion where my Dad literally waited 4 or 5 minutes before a Pike engulfed a suspending jerkbait, but luckily on this occasion I only had to wait about 20 seconds and I was hooked up!

It weighed 3lb 8oz, and as I knew my Dad was on his way to pick me up, I kept it in the net for a photo when he arrived. Whilst waiting, I had another cast and hooked in to another fish - this one again took the Pulse Shad and weighed 3lb 1oz! 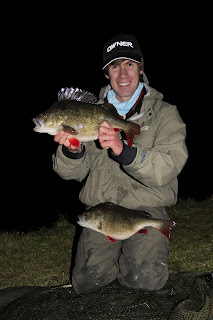 We caught quite a few more fish on the following couple of sessions, mainly Pike, but a few Perch too to just over 3lbs.

My half term was over and it was back to College for me, but seeing as it was my Dad's birthday, he decided to have a few hours lure fishing by himself. On his birthday last year, he caught a 14lb 9oz P.B Barbel, so decided to return to the area I'd caught my 4lb 12oz Perch in the hope he could catch another P.B. He fished hard all afternoon without a single bite. Whilst driving home, he was a bit frustrated he hadn't done very well, so he decided to stop off on the way back at an area where, sometimes, we catch a few fish in the dark - even a small Pike would have cheered him up!

After 3 or 4 casts he hooked a fish, but this unfortunately came off. Not giving up, he carried on and minutes later, he had a nice Perch just over 3lbs in the net. He was very pleased and was about to pack up, but there was one good looking spot he hadn't tried, so he had a few more casts. With bats flying in to his line, moments later he hooked in to another fish which felt like a decent Pike. After a good fight, he had a big birthday surprise laying in the net - a cracking Chub that weighed 6lb 14oz which had taken a 3" shad. It was immaculate and the biggest Chub we've ever heard of from this particular section of the Lea - and as it was a new P.B, he was chuffed to bits!! 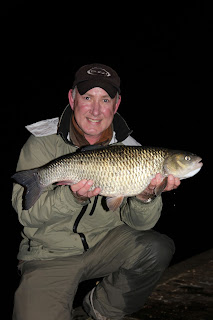 With only a few days to go, and the temperatures plummeting, we were back on the river again a couple of days later. We had a tough start, going 3 or 4 hours without a bite, but as with a lot of bites, they take you by surprise and my Dad hooked in to a nice Perch weighing 2lb 11oz. Around half an hour later he was hooked up again, this time in to a much bigger fish. After a nervy fight, he netted a pristine looking Perch. On the scales, it read 4lb 1/2oz - our fourth 4lb'er in as many months! 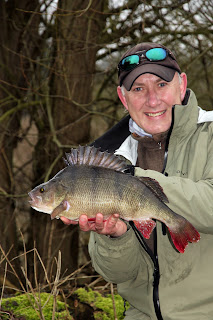 On the Monday before the end of the season, we fished on possibly one of the coldest days I have ever ventured out in! It was so cold that the Nanofil we were using was getting shredded as it went through the iced up rings, and we had to keep cutting off sections of damaged line! We probably shouldn't have even bothered fishing, but we did! The wind was biting cold, and we had to keep getting back in the car to warm up. Our efforts were rewarded though, with 5 stripeys to just under 3lbs, and a nice Pike. I must admit though it was nice to get home that evening and back in the warm!

The conditions on the last day of the season weren't ideal - a really hard frost, a crystal clear river and bright sunshine, which lasted until around 2pm. We tried a couple of areas that we hadn't fished for a while because they hadn't been fishing very well, but we were hoping that may have changed! It didn't pay off though, with just one small pike coming from that section. So for the last couple of hours, we headed to an area where we felt our chances were greater. It was still tough going though, but we both managed to catch a couple of nice 2's.

Although the last day wasn't as good as we'd hoped, I've had a great time fishing this past season, and I really hope that the next one is just as enjoyable!
Posted by Sam Edmonds Fishing Blog at 05:32 2 comments: