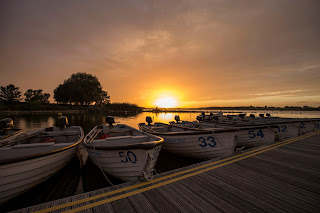 Over the years, September 1st has been a generous day to me and my Dad. It’s the day that Grafham and Rutland reservoirs open for their lure fishing season, and after experiencing some incredible fishing last year, especially for perch, we had high hopes for the first two days that we had booked. We were also looking forward to trying out our new toy - a Minn Kota Terrova iPilot electric trolling motor.

What a contrast it was to last year and previous years though. Over two days, between the two of us, we really struggled for bites. It wasn’t the action packed start we were hoping for, although it only takes one bite to change a difficult days fishing in to a successful one - and that can definitely happen when you’re fishing on reservoirs. Dad’s first bite on the first day came from a perch of 4lb 3oz (47cm) which made the trip more than worthwhile! It took a chatterbait fished on a straight retrieve. 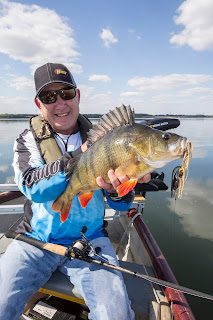 Two days later, I had a boat booked for Rutland, and I was hoping the zander would be more obliging there than on the opening two days at Grafham. I fished with Hugh Arnott, who was in to the fourth day of a challenge he’d set himself, which was to catch 60 species of fish in 60 days, raising money for three angling related charities. Hugh was hoping for his first ever zander, and what better venue to try for one than Rutland?! Or so we thought…

The morning was quite productive, with pike up to around 10lb, a few nice perch, and I’d also caught a couple of zander, but Hugh needed to catch one, not me! After midday though, we started to struggle for bites. 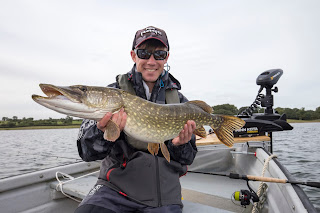 Zander can often switch on right at the end of the day though, and with just half an hour before the boats needed to be in, Hugh boated his target species! We were both ecstatic! Fishing all around the country in both freshwater and saltwater, Hugh went on to land an incredible 75 species over the 60 days of his challenge - a phenomenal achievement! 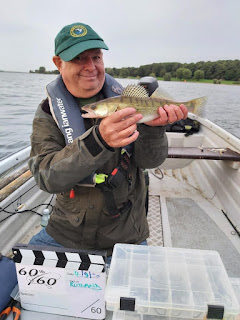 Over the following few weeks, we mixed up our fishing between reservoir outings and exploring rivers and gravel pits. There was one stretch of river that we’d explored in the summer that we thought was worth a revisit. Chub would be the target species, and with the water being crystal clear, we had some awesome fun spotting, casting to, and watching the fish take the lures!

I’d already caught a nice chub before I spotted three much bigger fish together on a bend. Creeping up very slowly, I made a cast to a small slack area on the other side of the river, so that when I started to retrieve in to the main current, it would swing my Salmo Rattlin’ Hornet Shallow right in front of their noses. Two of them drifted back downstream, but the biggest of the fish remained interested, and chased down the lure, before slamming it in the margins!

The follow and take was exciting enough, but the chub also turned out to be a new personal best of 6lb 5oz and 60cm! Dad and I went on to catch another six chub, plus a couple of perch and pike, in what turned out to be an action packed day! 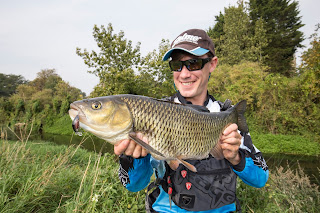 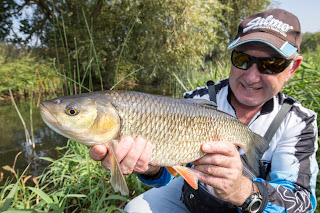 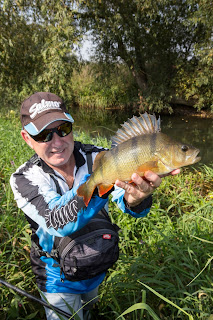 A few weeks later, I met up with Fox Rage cameraman, Samim Abbas, for a film about lure fishing on rivers in the autumn. With the river conditions looking ideal, I was confident I should be able to get a few bites for the camera. Samim was actually running a bit late as he’d been caught up in traffic on the M6, so I started fishing before he arrived as I didn’t want to miss fishing at dawn, one of the peak times of day. It’s always nice when you get off to a good start for a film, and on my first two casts I managed to land two perch, with the biggest being 3lb 1oz (42cm). 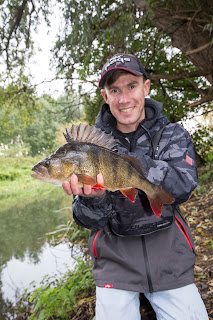 Dad and I have been enjoying exploring a new gravel pit we’ve joined, which I mentioned in my last post. Fishing a new venue is always exciting, and my first perch from the lake has so far been my biggest from the venue, although I’m convinced there are bigger in there… 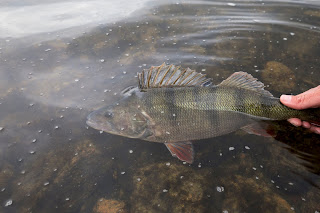 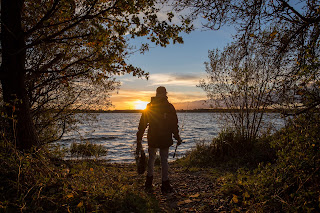 Chatterbaits are one of my favourite types of lures, especially for searching new venues. Fishing a chatterbait of around 4-5 inches in length, you have the chance of catching not only pike, but they’re not too much of a mouthful for a big perch, and zander love them too. Because of their profile, they sink at a slightly slower rate than lures that are streamlined, and you often get bites on the drop when using them. They typically occur when casting to structure, but occasionally, they happen in open water. The chances of the latter happening on a massive gravel pit are slim, but my bladed jig must have landed within a few feet of this metre long pike's nose, as it took the lure on the drop on my first cast in a new swim! 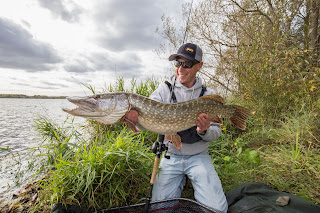 During that time we continued to have the odd trip to Rutland and Grafham, which seemed trickier than previous seasons. What seemed apparent was that feeding spells seemed to be very short - you may get two or three bites in a short space of time, then have no more bites for hours on end. 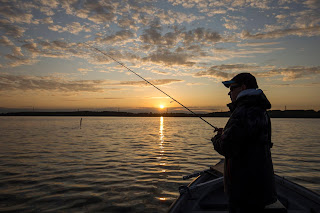 The reservoirs are full of baitfish at the moment, more than I ever remember there being - look at the sonar screen when you’re motoring across Grafham and you’ll see what I mean! That’s probably because the last couple of winters have been very mild, and the coarse fish have had successful spawning seasons, so silverfish numbers have boomed. There certainly isn’t a lack of food for the predatory fish, so they don’t need to hunt around as much, which we think may have something to do with the short feeding spells. That’s one theory anyway! 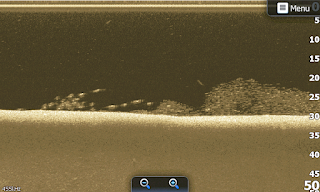 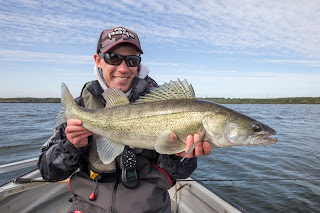 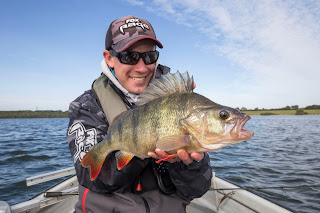 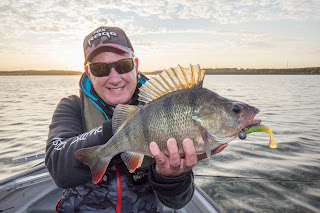 Three weeks passed between that trip and the next on a reservoir, and we were hoping that the predators might have switched on as the temperatures had cooled. Neither of us had a bite after six hours of fishing though, but all of a sudden we came across a group of what turned out to be some very nice perch. Fishing Slick Shads and Zander Pro Shads either jigged or on a straight retrieve, by the end of the day, we’d ended up landing six of them to a best of 4lb 1oz, which Dad caught. 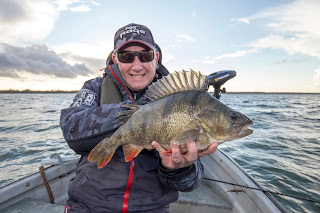 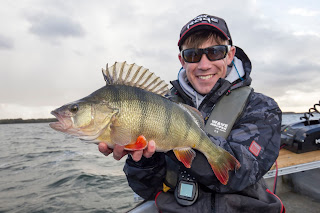 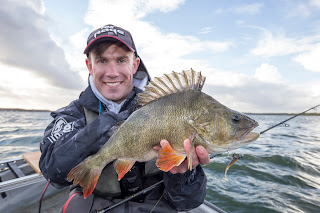 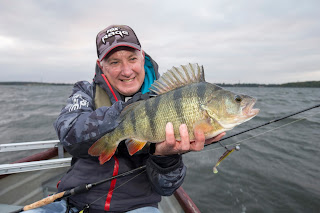 We were desperate to get back, but with Storm Alex approaching the UK, strong winds were forecast for the next eight days, and I booked a boat for the calmest of those days, which was expected to be 17mph - bumpy conditions on a big reservoir!

Putting up with the wind was made worthwhile though in the first half hour of fishing. I had a take from what felt like either a zander or a very heavy perch - and it was the latter. At 4lb 6oz and 47cm, it was my biggest ever perch from Grafham - what a start! 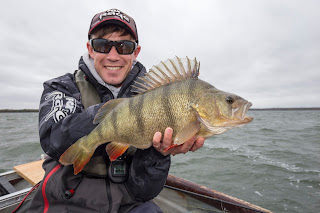 We knew, going from what we’d learned from previous trips, that the feeding spells were short and there was a good chance we may get some more bites over the next 15 minutes or so, so as soon as we released the fish we quickly started fishing again. On the very next cast, I had another bite and was in again! As it came closer to the boat I could feel this had much more weight to it and it was tearing drag, so I was almost certain it was a pike. I had to back the drag off a little as I was only using 20lb braid on a 2500 sized reel, so didn’t want to apply too much pressure, but thankfully the fight didn’t last very long anyway, and a big pike was in the net! At 23lb 4oz and 105cm, it was an amazing brace of fish! 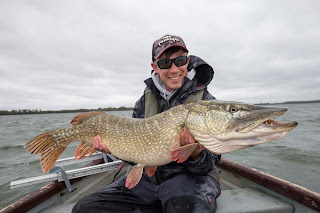 To say the fish were switched on was an understatement because two casts later, I had another take, which turned out to be another big perch of 4lb 1oz, and as I was releasing that fish, Dad had hooked up and I don’t think I’d even put the net down before I scooped up his perch. It was the ’smallest’ of the day weighing 3lb 15oz! 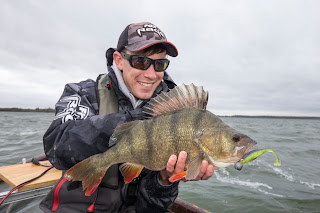 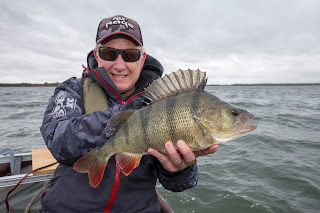 True to recent form, that ridiculous 45 minute spell of bites suddenly came to an end, but it took a couple of hours to sink in what had just happened. I actually joked with Dad that all I needed now was a double figure zander to complete a grand slam of big predators, although I knew the chances of that happening were pretty slim as Grafham has been fishing hard for the zander this year. But you never know on there…

We ended up exploring some different areas for a couple of hours. We’d caught all our fish so far on 11cm Slick Shads in UV Green Pumpkin, but the only trouble was that even before we’d started fishing there were only a couple left in that colour in our box. Dad was using one and by the time mine had caught 2 big perch and a 20lb+ pike, the soft bait had been trashed, so I changed to the closest colour to it - UV Dark Oil, which basically has a dark green back and a slighter lighter belly. Casting around, I had a take - and as I played it, I realised it felt a lot like a zander. As it emerged, it indeed was a zander, and a good one too! It measured 74cm - short, but very fat, and it weighed 10lb 2oz! I was literally speechless. 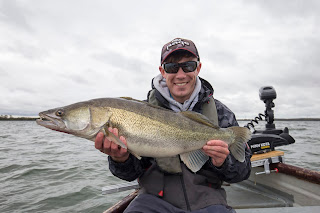 One more nice pike later, and it was time to head in. That was our last trip to a reservoir, as it came just in time before a second national lockdown in England. Although the reservoirs are now shut for boat fishing, we’re still allowed to fish locally thanks to the hard work of the Angling Trust campaigning for angling to continue. Dad and I have already had a few trips lure fishing on our local rivers, which I’ll talk about next time… 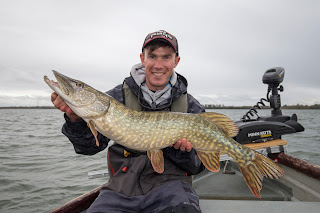